Reservations are not the answer to every social and economic problem. More needs to be done to provide safety nets to vulnerable groups. 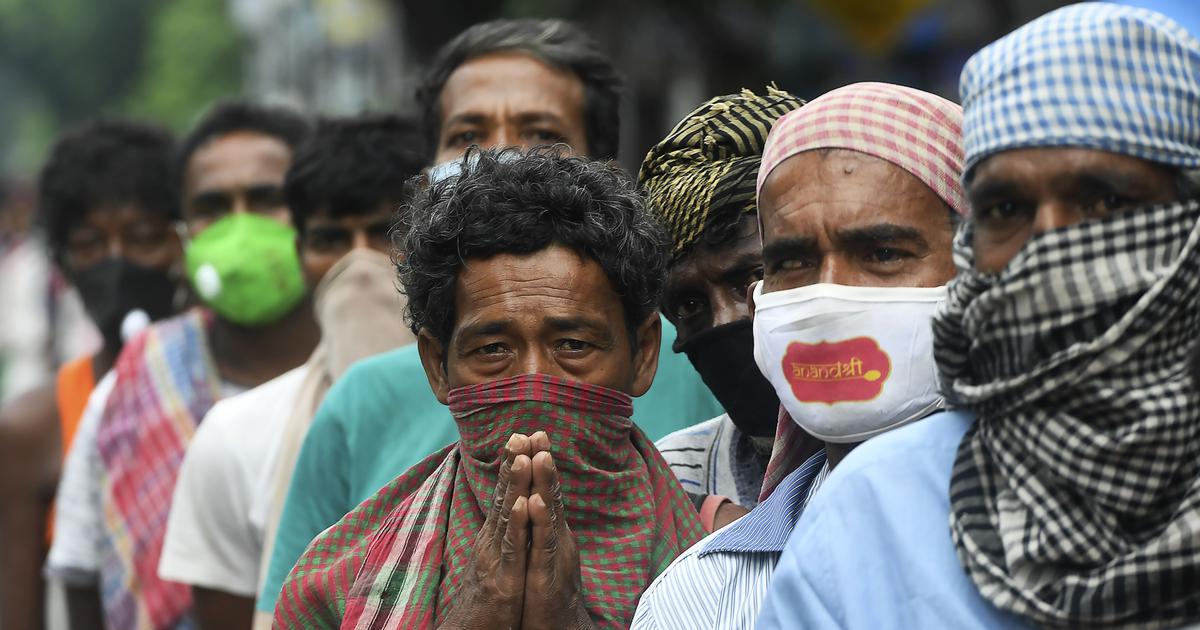 During the lockdown-induced economic distress, those with precarious daily wage and casual jobs have been the most vulnerable to falling into deep poverty.

About 10 crore to 12 crore Indians lost their jobs in the immediate aftermath of the countrywide lockdown to contain the spread of Covid-19, IndiaSpend reported in April.

But the lockdown has impacted the disadvantaged caste groups with a far greater magnitude than the upper castes, found a new paper investigating if the pandemic is a “leveller” of social distinctions. It noted that “while all caste groups lost jobs in the first month of the lockdown, the job losses for the lowest-ranked castes are greater by a factor of three”.

“Pre-existing faultlines, structural inequalities based on caste identity reveal themselves yet again in the immediate post-lockdown job losses,” Ashwini Deshpande, professor of economics at Ashoka University and co-author of the paper, told IndiaSpend in an interview.

In a paper in March, Deshpande and co-author Rajesh Ramchandran showed that children from socially disadvantaged groups are more likely to become stunted. That incidence of stunting among upper-caste children in India is similar to the national average for the low middle-income countries while stunting among Scheduled Castes, Scheduled Tribes and Other Backward Classes children are around 10 percentage to 15 percentage points higher.

During the lockdown-induced economic distress, “those with precarious daily wage and casual jobs have been the most vulnerable to falling into deep poverty”, she said.

The 10% reservation for economically weaker sections introduced by the Centre in 2019 “marks a major departure from the role of reservations as a policy of compensatory discrimination”, said Deshpande, adding that reservations alone “are not the answer to every social and economic problem”.

Deshpande is the founding director of the Centre for Economic Data and Analysis at Ashoka University. She is the author of Grammar of Caste: Economic Discrimination in Contemporary India and Affirmative Action in India, Oxford India Short Introductions Series (2013). In 2007, she won the VKRV Rao award for Indian economists under 45.

In an interview, she talks about the impact of Covid-19 on vulnerable caste groups, the issue of reservation and caste, and the Centre’s reservation quota for upper castes on economic grounds.

Excerpts from the interview:

A July 2020 paper by you and Ramachandran – to understand the critical role of social identity in lockdown – induced job losses – found that while Covid-19 has led to job losses across caste groups, SC, ST and OBC are the worst affected. How has the pandemic exposed structural issues in our economy and social hierarchy?
In our earlier research, we had found significant caste gaps in a variety of outcomes [like] education, occupation [and] early childhood health indicators. In our July paper on the impact of Covid-19 on employment, we report that the share of individuals with more than 12 years of schooling is 37% for upper castes and 17% for SCs, and note that upper castes hold 3% of daily-wage jobs, which are precarious with no security, compared to [the] 16% among SCs.

In this paper, we show that although all caste groups saw job losses immediately after the lockdown, the rate of job losses among SCs was three times higher than the upper castes. Since the upper castes have more access to education and thereby have more secure jobs, they are less vulnerable to economic shocks such as the one produced by the lockdown.

Therefore, we see that pre-existing faultlines, structural inequalities based on caste identity, reveal themselves yet again in the immediate post-lockdown job losses.

Talking about structural inequalities, how do you view reservation for the EWS in education and government jobs and its impact on affirmative action, particularly when marginalised groups such as SCs, STs and OBCs already earn less household income than the national average. The Supreme Court, in August, decided to form a five-judge Constitution bench to look into the pleas opposing the EWS quota.
The government calls it a quota for economically weaker sections, but I prefer to call this the 10% quota, which is an accurate description of what it is. The income ceiling [Rs 8 lakh per annum] below which EWS is defined is so high that 98% of Indians fall under it. Thus, it is completely inaccurate to call it the EWS quota.

The Supreme Court has also agreed to examine a petition for extending SC status to Dalit Christians or Christians of Scheduled Castes origin. The plea seeks that the SC category be made religion-neutral. What is your view of the status of Dalits in minority religions?
Scheduled Castes, OBC and ST are legal categories created for the purpose of affirmative action. The schedule (say for Scheduled Castes) is a list of specific jati (caste) names that qualify for inclusion. So, groups that do not get included in the category then get classified under “Other” groups (general category).

If a group is not listed in any of the legal categories, data are not provided separately for them as a category, because they do not belong to a separate legal category. Dalit is a term used by members of the SC community as a term of pride. It is a political category and not a legal category.

Some members of the Christian or Islamic faith have been arguing that they have Dalit status or lower caste within their religion and they are entitled to SC status. But considering that they have not been [legally] assigned SC status, from data [on Dalits] you cannot identify who the SC would have been had they received the status. [Editor’s note: Paragraph 3 of the Presidential Order of 1950 limited the classification of Scheduled Castes initially only to Hindus. The order was amended to include Sikhs in 1956 and Buddhists in 1990, but Dalits who converted to Islam or Christianity remain out of its ambit.]

This brings to the fore a critical feature about Indian data on caste. The last caste-based census was [conducted] in 1931, where we had data on each jati separately. The Socio-Economic Caste Census 2011 was supposed to provide such data, but it has not been released yet.

How does one get from formal to substantive equality? By creating conditions to level the playing field; individuals from groups that have suffered due to inequality (not economic inequality) need to be identified in a schedule for affirmative action.

This is the reason we have caste-based affirmative action along with an idea to build a casteless society. So we have data for groups included in the government-mandated lists (schedules) but everyone else, who is not entitled to affirmative action, is in the residual “Others”.

There have been agitations for reservation by even dominant castes such as Jats and Marathas in the last few years. Is there a need to reimagine reservation and caste identities through data? If so, how must it be done?
If the issue is poverty and economic deprivation, which characterises millions of Indians across the caste spectrum, including upper castes, then the government should absolutely and urgently invoke and properly implement a slew of anti-poverty and employment-generation policies. There is no doubt that all Indians, especially the poor, need to be protected from hunger, ill-health and lack of shelter. They need education and access to health.

But reservations in public sector jobs and colleges is not going to ensure this. Reservations are not the answer to every social and economic problem.

As we have seen during the Covid-19 lockdown-induced economic distress, those with precarious daily wage and casual jobs have been the most vulnerable to falling into deep poverty. The pandemic has emphasised, with utmost urgency, the need to have social and economic safety nets, stable employment, a combination of cash and in-kind transfers to ensure that basic needs are satisfied.

We have also seen how lack of access to good, or even basic, healthcare can have catastrophic consequences. All these issues should be on top of the policy agenda of every government.

Hindu nationalist politics has assumed centre stage in India, even as caste continues to remain an important electoral factor. How much of a bearing would caste and the emphasis upon expanding the scope of reservations have on electoral politics?
Caste is an important marker of socio-economic status and inequality. Reservation is only one of the anti-discriminatory policies that the government can use. Reservations make the composition of elite positions more representative of the underlying social composition. [For example, there is representation of SC (15%), ST (7.5%) and OBC (27%) in central government jobs and public universities; this increases representation of marginalised groups in such domains which are generally over-represented by upper castes.] But to loosen the stranglehold of caste inequality much more needs to be done.

If Hindu nationalist parties believe that all castes are equal, then their policies should reflect that belief. They should put in place policies that genuinely work towards eliminating both social and economic inequality between caste groups.

This would mean very strict action against any expression of untouchability, a complete elimination of the degrading and humiliating system of manual scavenging, zero tolerance towards atrocities and violence towards Dalits, a strong anti-discriminatory framework, strict action against hate crimes, no social persecution of Dalits for pursuing traditional occupations related to cattle, leather and meat, among other measures. These would be over and above the anti-poverty and employment-generation economic measures, along with the provision of basic health, education, food and shelter.

How have the existing gender disparities in India impacted women? Your paper found that women who were employed in the pre-lockdown phase were roughly 20 percentage points less likely to be employed in the post-lockdown phase.
Unlike the international experience where more women have lost jobs during lockdown than men, in India, more men lost jobs in the first month of lockdown compared to women. Elsewhere in the world this is because the sectors that have reported the first job losses employ women in large numbers.

In India, the experience is different because of the large and persistent pre-existing gaps between male and female labour force participation rates and employment. Because many more men were employed before the lockdown, in absolute numbers, many more men (10.4 crore) lost employment in April compared to women (1.7 crore). However, conditional on being employed immediately pre-lockdown, women were less likely to be employed in the first month of the lockdown. This means that women suffered disproportionately more.

What comparisons can we draw between race and caste-based affirmative action in India and the United States from the perspective of economic and social justice?
The term affirmative action is used to describe a set of policies (quotas in India and preferences in the US), but in their operationalisation, the specifics differ a great deal across the two countries.

In terms of social justice, obviously both countries have a major problem that affirmative action is trying to address – racism in the US and casteism in India. In both the countries, affirmative action can only be one of the many instruments, in what ought to be a large, interconnected menu of policies, to combat a problem as deep-rooted and multidimensional as racism/casteism.