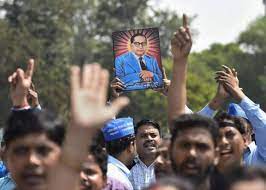 Dalit atrocities are now on the rise amid attacks on Christians in Karnataka. In a shocking incident, a Dalit youth was thrashed in a Lingayat-dominated village in Mysuru district for using a public road built by the government in front of a temple.

Three people have been arrested in this case and a case has been filed against 11 people.

This incident is from Annoor Hoshahalli village of HD Kote taluk. Mahesh, belonging to Scheduled Caste etc. Karnataka, was going on a motor cycle with a friend when he was stopped by some people near the Shiva temple. After that they allegedly beat up Mahesh. They all belonged to the Lingayat community.

Let us tell you that Lingayat and Vokkaliga are two big and important castes in the society of Karnataka. They dominate all the fields including politics, education, business, agriculture, jobs. These two castes keep fighting each other for supremacy, but the people of both these castes keep facing allegations of oppression and discrimination against the people of scheduled castes and tribes.

In the latest case, Dalit youth Mahesh told The Indian Express, “Five years ago the Lingayats and Dalits of this village together built a Shiva temple, both gave money, both did shramdaan, both had equal share.”

Mahesh said, “The situation has become such that Dalits have been asked not to pass through the road in front of the temple and most of the Dalits have accepted it. But I did not accept it and kept going on and off the road.”

Mahesh said, “I was going with my friend on a motor cycle when people stopped me and told me not to go on this road. When I asked the reason, they beat me up.”

In this village about three hundred houses belong to Lingayats and 35 belong to Dalits.

Note: This news piece was originally published in satyanews.com and used purely for non-profit/non-commercial purposes exclusively for Human Rights objectives.