The poll bugle has been sounded in Bihar. Far from the din of the tall claims and the impossible-to-fulfil promises, Seetu Tiwari visited the survivors of the Laxmanpur-Bathe massacre scripted by the Ranveer Sena on 1 December 1997. The horrific scene is still fresh in their minds and they still await justice

Punia Devi, now 37, was widowed even before she could see the face of her husband. It was 1997 and Shivkailash Chaudhary, a resident of Laxmanpur-Bathe, had just returned to his village after his marriage at Kera village in Aurangabad district. As was the tradition, the bride and the groom were not allowed to see each other’s face during the wedding ceremony. Punia could not see the face of her husband even after his death.

Punia’s mother-in-law Dukhni Devi asks, “How could she have? His body was lying on the banks of the Son [River]. My maalik [husband] Channari Chaudhary and our two sons Gorakh and Shivkailash had gone to catch fish when they were done to death. She [Punia Devi] was Shivkailash’s wife. Even her ‘donga’ [a post-wedding ritual in which the groom travels to his in-laws’ place along with his family members to bring the bride to his home] had not been performed.”

On hearing the horrific news, Punia, daughter of Butayee Chaudhary and Mokhni Devi, came to her in-laws’ place without the donga. She performed the death-related rituals of her husband and lived with her mother-in-law for a year. Later, at Dukhni Devi’s instance, Dheman Chaudhary, another son of hers, married Punia Devi.

Punia says, “He [her husband] is younger to me. Of course, he loves me like anything. We have three children. He catches fish and labours in the fields when he gets work.” Punia got a husband and a family after the massacre but not a job. “I was the widow of a massacre victim. When we went to the DM [District Magistrate] Saheb for a job he said I was too young and illiterate. After that, I studied up to standard 3. But I still did not get a job.”

Punia Devi is one of the survivors of the massacre that took place on 1 December 1997 at Laxmanpur-Bathe. The Ranveer Sena had killed 58 Dalits in this massacre – the biggest in the history of the state. The then president, K.R. Narayanan, had termed it a national shame.

The killers had come from the direction of Bhojpur. They first killed the Mallahs who had ferried them across the Son. Then they went on a killing spree starting with the home of Shiv Bachan Ravidas. They were more than 150 in number and were carrying, besides guns, sharp-edged weapons. Their victims included 10 pregnant women and a one-and-half-year-old baby girl.

Laxman Rajvanshi, well over 70, is the oldest among the eyewitnesses who are still in a position to talk. He recalls, “It was around 8.15 in the evening. Suddenly, we heard shrieks. And the sound of gunshots. ‘Ranveer Baba ki jai’ slogans were being raised. I escaped from my house to save my life. When I returned after about two hours, I saw bodies strewn around in the village. One person was lying dead inside a mosquito net. A body was standing erect, leaning on a wall. The police came at 10 the next day. Chief minister Rabri Devi also came. Two tractor-trolleys ferried wood for the last rites. The bodies were carted away for cremation in tractor-trolleys.”

The families of the deceased received a compensation of Rs 2 lakh each and were promised a government job for a member. Most of the families did get government jobs but some are still waiting for it. Laxman Rajvanshi is one of the prime witnesses of the massacre. He recalls, “Darogaji himself came and took me with him to Patna. He put me up at his home as my life was in danger. He took me to the court on his motorcycle. He seated me between himself and the Munshi of the police station.”

WHEN WE GOT AWAY WITH 58 MURDERS, WHAT ARE ONE OR TWO?

Sixteen convicts of this massacre were sentenced to death and 10 to life imprisonment by the Jehanabad (now Arwal) district court on 7 April 2010. However, on 9 October 2013, all of them were acquitted by the Patna High Court for want of evidence. An appeal has been filed in the Supreme Court and is awaiting hearing.

The villagers say that even now the upper castes threaten them. The upper castes are emboldened by the fact that even after 23 years, none of the perpetrators of the heinous crime has been punished. Laxman Chaudhary says, “Once in a while, one or the other upper-caste man hurls a comment at us – when they could get away with 58 murders, how would a couple more matter? Sometimes, we feel very dejected. But then, we console ourselves that someday we will get justice.”

WOMEN WERE SURE THEY WOULD BE SPARED

Nine members of the family of Sikandar Chaudhary, including his wife and two daughters, were murdered. He saved his life by hiding behind a pile of firewood on the loft in a room.

When this reporter asked him why he did not try to save the lives of his wife and daughters, he said, “I wanted to save them. But my mother told me that they wouldn’t kill the women and children and asked me to find a place to hide myself. That is what I did. My life was saved but the earthen floor of my house was soaked in blood.”

Laxman Rajvanshi’s wife Jamurat Devi, daughter-in-law Manti Devi and daughter Prabha Devi were killed. When he heard the commotion from the side of the Son he escaped by scaling the perimeter wall at the back of his house.

He says, “We were having our meal. My daughter’s donga was a week away, hence some goods that were to be given to her for her farewell were also there in the room. When we heard the shrieks, my wife asked me to flee. She was sure that the assailants would not harm the women. But they mercilessly killed all the three women they found in the house. Even today, in the dark, I sometimes see their bodies drenched in blood lying on the floor.”

The survivors of the massacre say that a girl was raped by the assailants. However, when this reporter met the family concerned, they denied it.

After the massacre, many families were left with no woman to cook food. Seven members of Sunaina Devi’s family were finished off. Only her husband Vinod Paswan and father-in-law Ramchela Paswan could escape death. When this reporter went to her home, she was weaving baskets. The finished baskets, made of dried grass and bright blue foil, looked beautiful. But what she described was enough to send a shiver down the spine.

At the time, Sunaina was just 15 and was at her parents’ place. “I returned to my in-laws’ place after the incident. Smell of dead bodies pervaded the air. A strange eerie feeling gripped me. All the time, I would hear people sobbing, crying and shrieking. It seemed as if even the animals were terrified – and sad. My parents used to cry over my fate. I was the only woman left in my family. They would come here every 10-15 days just to check on me.” 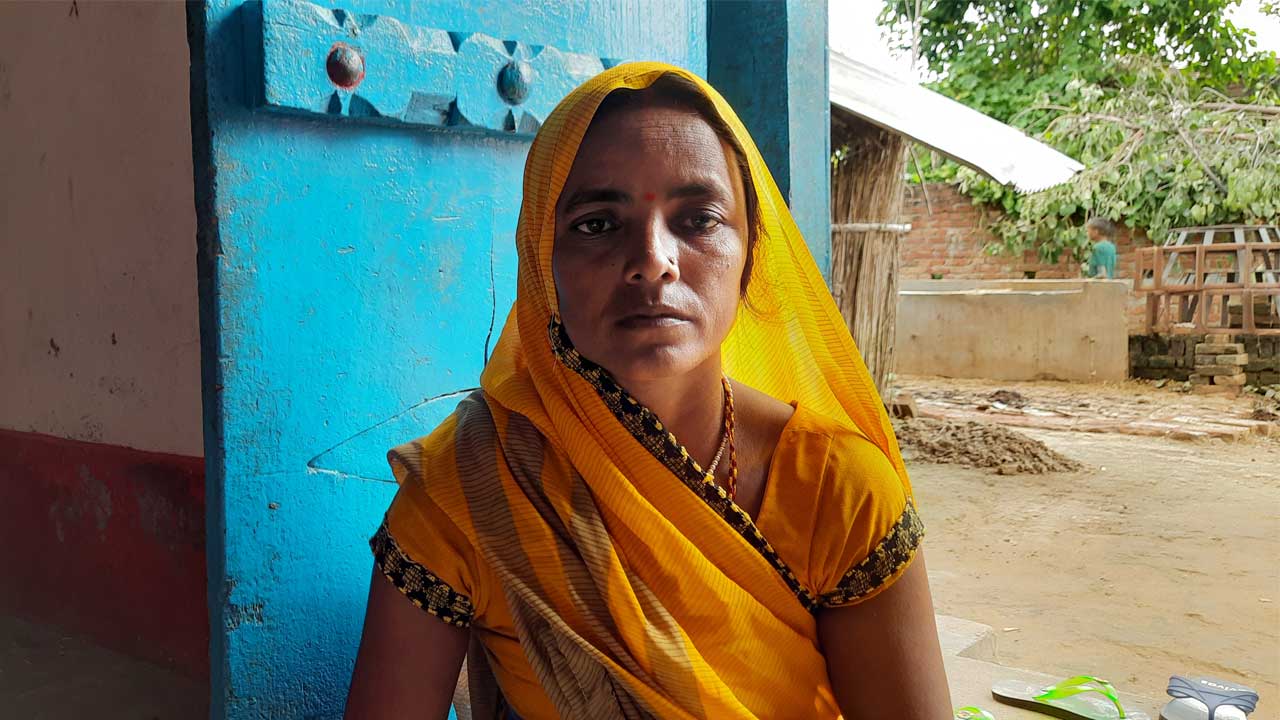 When will we get justice?: Sunaina Devi (Photo: Seetu Tiwari)

Sunaina’s husband Vinod Paswan later got a government job and now they are parents of seven children. The martyrs memorial (shaheed smarak) for the dead of the massacre has been built at the house of Sunaina and Vinod Paswan.

LOCKS HANG ON MANY DOORS

The house of Shiv Bachan Ravidas, from where the assailants had begun killing, is locked. So is the house of Kaushalya Devi, whose husband Naresh Chaudhary and brother-in-law Ramniwas Chaudhary, were slain by the henchmen of the Ranveer Sena on the banks of the Son. Her relative Meena Devi, who lives in the village, says, “After Kaushalya Devi was appointed to the health department, she moved to Arwal. She has built a house there. Now she comes to the village only once in a while.

Ramesh Kumar Mahto is just six months older than the massacre. His father Rampulis Mahto, mother Basanti Devi and aunt Taregani Devi were killed when he was just six months old. He survived because he lay completely wrapped in a quilt and was missed by the murderers. 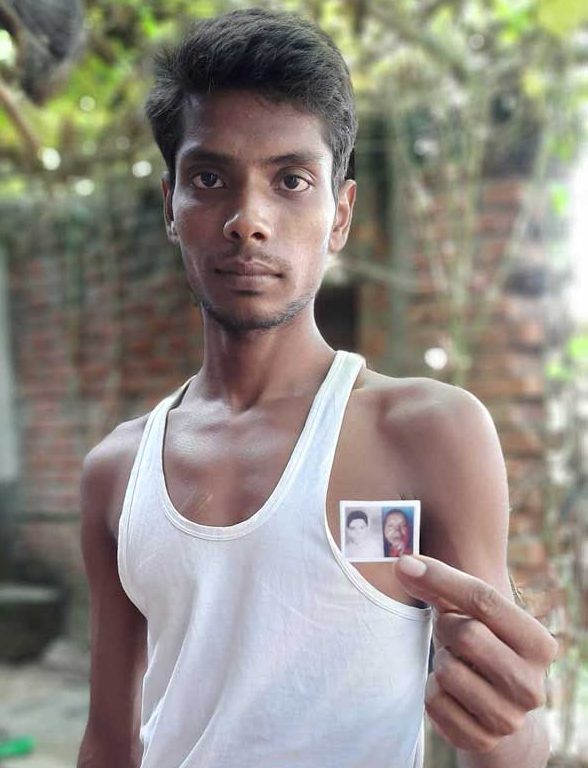 Ramesh Kumar Mahto with a collage of his and his grandmother’s photos  (Photo: Seetu Tiwari)

Ramesh naturally has no memories of his parents. His grandparents brought him up. Ramesh, who is preparing for his BSc examination, says, “Everyone told me that once I became an adult, I would get a job. But to date, I haven’t. The money we got as compensation is all but spent. I have abandoned hopes of getting a government job and am now working for a private company in Delhi.”

The CPI (ML) has been at the forefront of the campaign to secure justice for the massacre victims. The party got the martyrs’ memorial built in the village. The party moved the Supreme Court in 2013 after the Patna High Court acquitted all the accused. 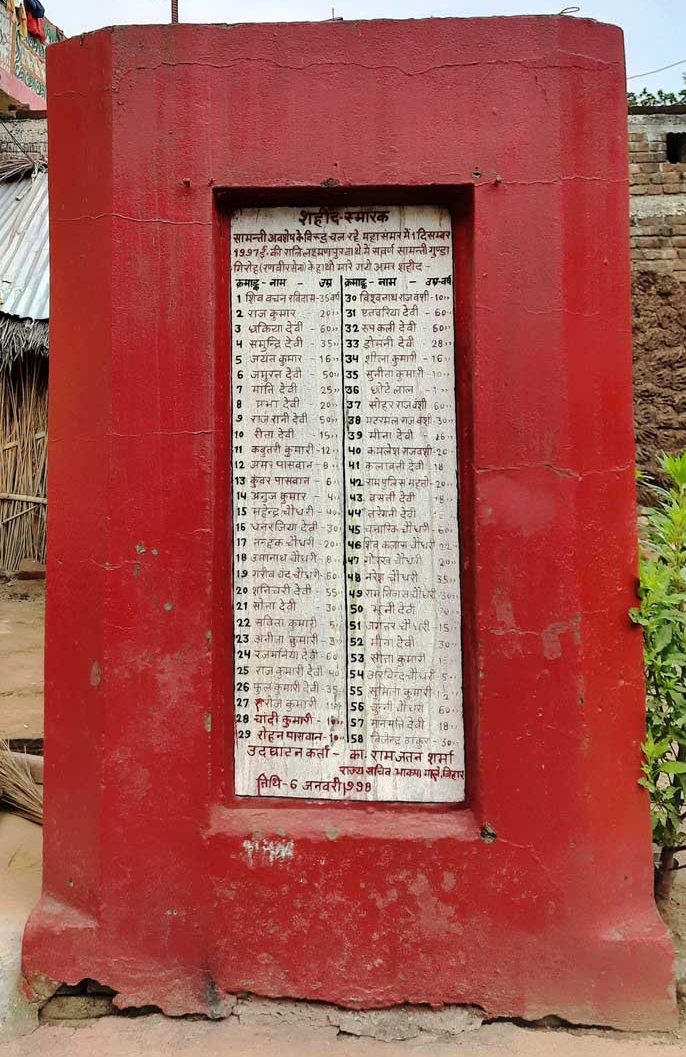 Kavita Krishnan, member of the politburo of the CPI (ML), says, “The case hasn’t been taken up by the Supreme Court to date. A hearing did take place in the Bathani Tola case but nothing came out of it. The victims keep on phoning me but I have nothing to tell them. We have no hopes from the Nitish Kumar government. It has even disbanded the Amir Das Commission which was to probe whether the assailants enjoyed political political patronage and if so from whom.”

The houses of the victims of Mahto, Rajvanshi, Paswan, Mallah and Ravidas castes are now pucca. Thanks to the Rabri Devi Government, most of them have government jobs. Their economic status has improved. But they still await justice. Their eyes seem to ask discomfiting questions to every visitor to the village – men butchered men here, and you didn’t even give us justice!