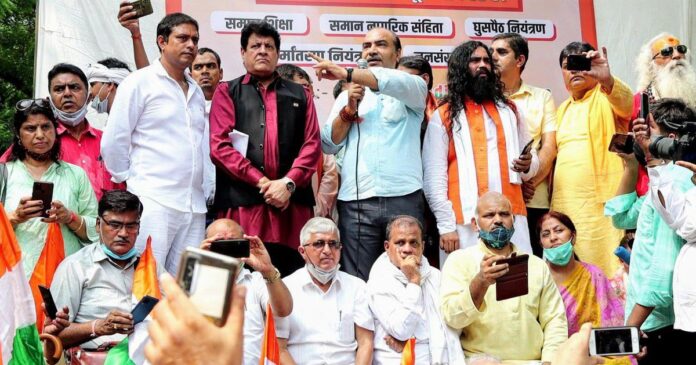 New Delhi: Violent protests were held at New Delhi by Hindus including BJP leader Ashwini Upadhyay against construction of Haj house and separate family law calling openly for a slaughter of Muslims in India. India continues its human rights violations in the name of Hindutva regime.

PM Modi is determinedly pursuing policies of RSS and taking all possible measures to promote Hindutva and eliminate Muslims from India. It is a matter of great regret that RSS ideology is ruling India today.

Recently, the police in New Delhi filed a first information report against unidentified persons, a day after inflammatory slogans calling for lynchings against Muslims were shouted at a rally in Jantar Mantar, an observatory in the Indian capital, less than two kilometres from the Parliament.

The FIR did not name any specific person even though several videos from the rally clearly showed the identities of the participants, Scroll.in reported.

A local Bharatiya Janata Party leader, Ashwini Upadhyay, posted several tweets asking people to join the event. Another BJP leader, Gajendra Chauhan, was also among the participants in the rally.

The unknown persons have been booked under Sections 153-A (promoting enmity between different groups) and 188 (disobedience to order duly promulgated by public servant) of the Indian Penal Code and Section 51 of the Delhi Disaster Management Authority Act for violating Covid-19 protocol.

Upadhyay had called for the march at Jantar Mantar as part of his “Bharat Jor’ro [Unite India] movement”. The organisers demanded an end to “colonial-era laws” by setting up a uniform civil code in the country.

Videos from the event showed a group of people shouting slogans such as: “Jab mullah kaate jayenge, Ram Ram chillayenge [Muslims will chant Ram Ram when they will be slaughtered].”

Those who attended the rally also flouted Covid-19 guidelines as they neither wore masks nor maintained physical distancing norms. A journalist present at Jantar Mantar was also assaulted and asked to chant “Jai Shri Ram”.

“Police arrangements were in place and we thought around 50 people would come, but suddenly many people in small groups started gathering. They were protesting peacefully, but started raising slogans when they were dispersing.”

However, an officer from the Intelligence Wing said Delhi Police’s Special Branch had informed New Delhi district police that a large crowd was expected, the newspaper reported.

Deputy Commissioner of Police Deepak Yadav said they were verifying the video clips.

This was the second incident in the past week where hate slogans were shouted against Muslims in New Delhi.

Earlier, Hindutva groups and other organisations held a mahapanchayat, a congregation of people from several neighbouring areas, in the northwestern city of Dwarka to protest against the construction of a Haj House in the town.

Videos from the event showed the protesters making communally sensitive comments and calling for violence if the unit is built. The chief of the BJP Delhi wing, Adesh Gupta, was also present at the event. Web Desk