Local residents of Khajuri Khas, one of the areas worst affected by the communal violence early this year, allege Hindutva outfits continue to vitiate the atmosphere.
Sumedha Pal 30 Nov 2020 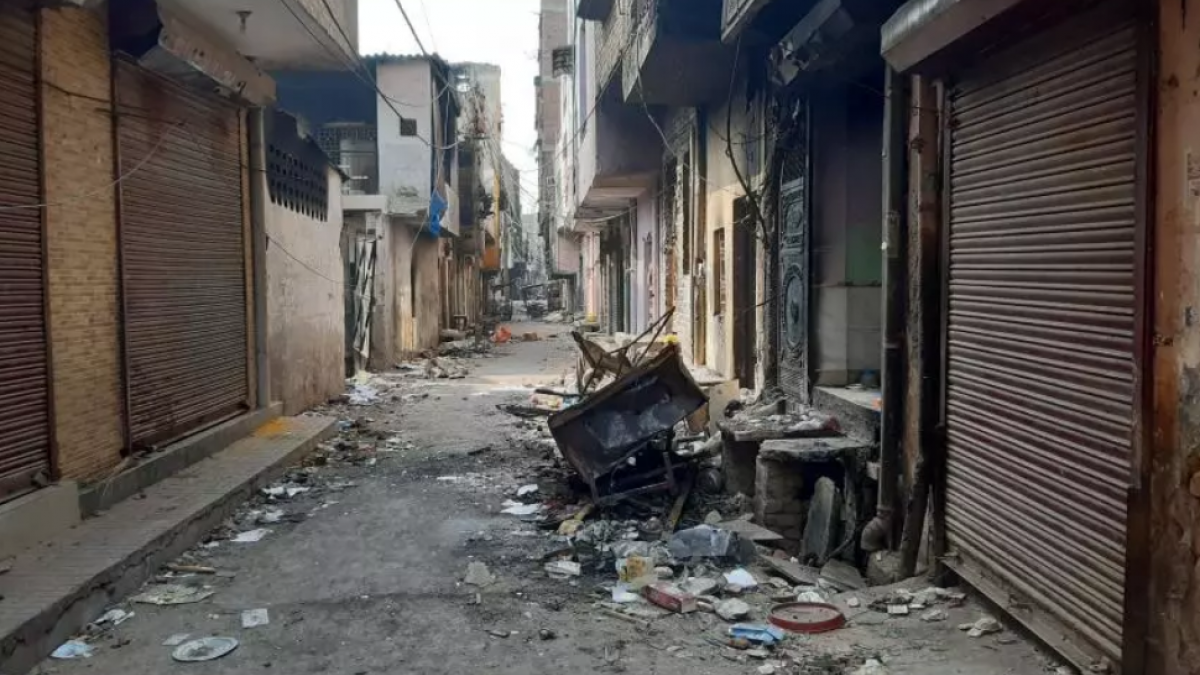 New Delhi: Nine months since the brutal and chilling communal violence in Delhi’s North-East district, fanatic Hindutva outfits allegedly continue to terrorise Muslim residents in some areas, and the police seems to be again indifferent.

Several Muslim residents of Khajuri Khas, one of the affected areas in the February violence, alleged that on November 14–Diwali night –a group of seven boys in the area gathered in lane no 29 in front of their local mosque and burst fire crackers, shouted communal slurs and threatened Muslims with dire consequences.

One of the residents, Mehboob Alam, urged the boys to stop bursting firecrackers. He also called the Police Control Room for assistance. Some policemen turned up a few hours later and went away.

Two weeks later, on November 27, Alam was arrested by police who claimed he was involved in the February riots. Alam is presently in Mandoli jail. The young men who allegedly tried to “desecrate” the mosque and used communal and abusive slogans, are still free.

According to Alam’s sister, many families are now living in fear. Narrating the events of that night, she told Newsclick that as Diwali night drew in, some men from different lanes gathered in lane number 29, creating an atmosphere of panic.

“We initially felt it was Diwali so the boys were celebrating, but soon they turned aggressive and started shouting communally loaded slurs,” she said.

“The boys were placing crackers on the walls, gate and windows of the mosque. After that my elder brother came downstairs and tried to stop them and told them that the police would be called”. We called 100 but the police did not respond. The police patrol bike came at 1.30 in the night but no one came out because of the fear,” she said. Still from the video footage, which has not been independently verified by Newsclick.

Another resident of the lane alleged: “The entire lane is huge, and they intentionally came in front of the mosque gate. When we questioned them, they said that they had assembled here from different lanes, some were from lane number 5, some from 23, it was all planned in advance.”

The purported video footage accessed by NewsClick, which has not been independently verified, shows young boys bursting firecrackers outside the mosque. The footage also shows a man (said to be Alam) intervening.

Local residents claim that there have been attempts by Hindutva outfits to vitiate communal harmony in the area soon after the foundation for the Ram Janmabhoomi temple was laid down in Ayodhya, when the area saw display of saffron flags and riot victims being threatened.

Alam was arrested on November 27. While his family states he is being punished for being vocal and raising his voice against the incitement the Delhi police claims that he was arrested in connection with the riots, as new video footage has surfaced which establishes his role in the case.

Mehboob Alam, a 45-year-old factory worker, and his 25 year old brother, who reportedly laid the foundation of the mosque some 10 years ago, are in jail. The brothers have been charged under various Sections of the Indian Penal Code, 147, 148, 149 436. Charges amount to rioting, punishment for rioting, mischief by fire or explosive circumstances and unlawful assembly.

After these arrests, fear looms large in the area with local residents raising questions on the intentions of Delhi Police – which is under the Union Ministry of Home Affairs – alleging that random persons were being incriminated in the Delhi riots cases, citing remote links with the some incidents.

Alam’s family said instead of supporting riot victims, the police was instead framing them in different cases. Speaking with NewsClick, his wife said: “Our entire three-storeyed house was burnt down, we were one of the worst sufferers of the riot. Even after all this, we are not able to live in peace. We are the victims and we are being victimised further. We have our faith in the Constitution.”

Another sister of Alam said: “Men came in plain clothes to arrest him, we did not even know what was happening, and were taken aback. They were rude to us and did not have any warrant or a uniform on them.”

A resident, who saw the arrests being made, said: “I haven’t been able to sleep since the day that this happened, we keep fearing for our lives. We are tired of living like this, for us the only option is to go to court or die. Why don’t they kill us all at once?”

The family has now vowed to take on the case legally, but is scrambling to manage resources and social support.

NewsClick visited the DCP office to understand the nature of Alam’s arrest. When asked about the instance of the firecrackers on Diwali day, police inspector Pawan Kumar at the DCP’s office said: “The issue of the firecrackers being burst is a separate one. We do not have any ill will toward someone, if one has to represent something it can be done in any way.”

The inspector went on to show NewsClick a video clip of February 25, over a minute long, that showed a man calling out to others in the street to come out of their homes, and claimed that the man was Alam “inciting others to come out and participate in the riots.”

The clip appears to have been taken out of a CCTV and was grainy. NewsClick has not been able to verify if the man in the purported video clip is Alam.

The police officer said the footage was not available with them over the course of these months and was made available only recently by another proceeding in the case. DCP (North-East), Ved Prakash Surya said: “We have not made any illegal arrests, the arrest has been made in connection with the riots after scrutinising the video footage available with us.”

Alam’s case is not a lone instance. Activists allege that over the course of the lockdown, several youth from the area have been picked up and are languishing in jails, framed for communal violence that took place early this year. The violence left 54 people dead, a majority of them Muslims, and led to the complete crumbling of the businesses and livelihood in the region, mainly impacting Muslim households