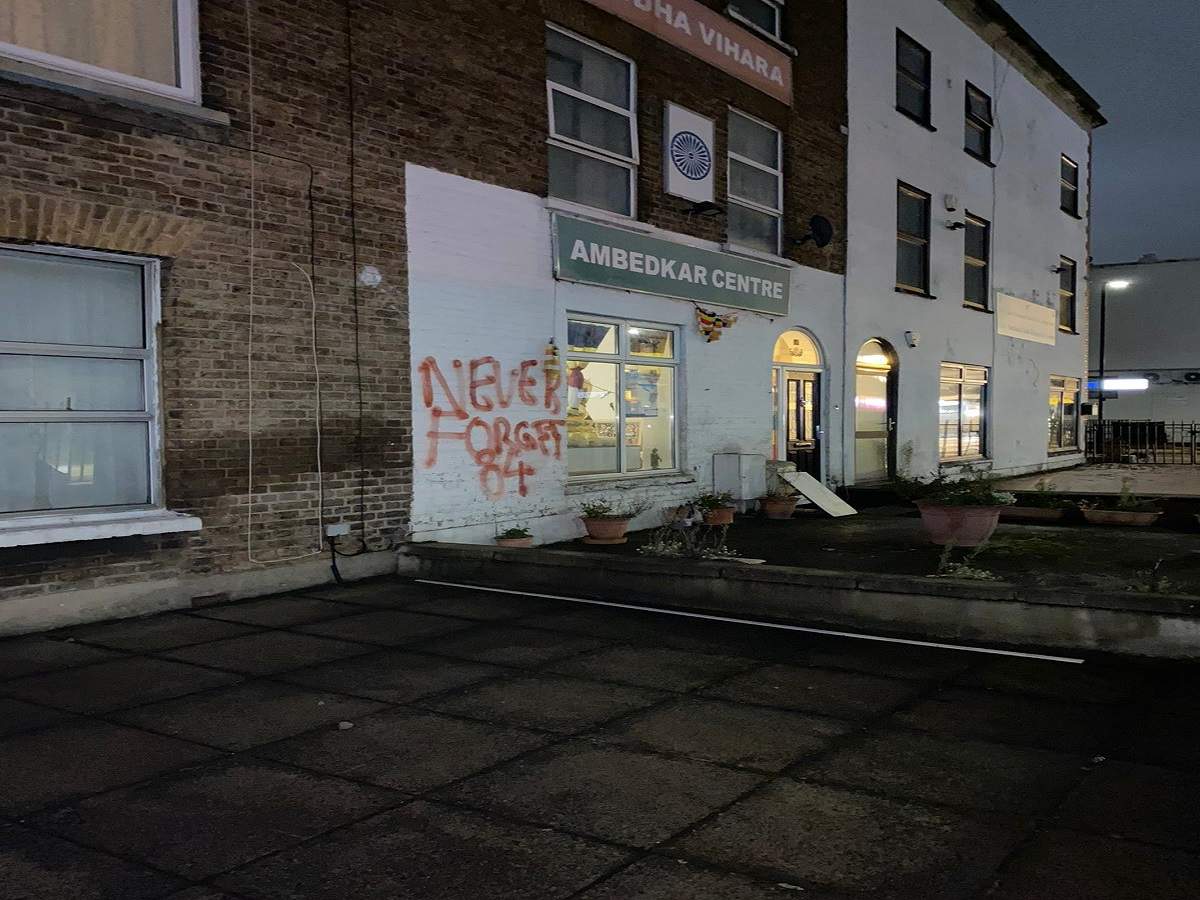 LONDON: Miscreants sprayed graffiti over the wall of a charity set up to promote the teachings of Dr Ambedkar in Southall

on the anniversary of the assassination of Indira Gandhi, seemingly having mistaken it for a government of India building.

The centre is next door to the Sikh Missionary Society, which promotes Sikhism. Volunteers there said they wanted to know who had done the graffiti and that they had a good relationship with the centre.

The trustees of the Dr B R Ambedkar Memorial Trust who run the community centre were equally bemused. One of the trustees told TOI: “I think we were targeted because of the signage on the exterior of our building.”

“We don’t represent the government of India, nor do we receive any funding from them,” he said. “We are an independent registered charity supported by our members.”

On the exterior of the Dr Ambedkar Centre there is a saffron sign saying “Buddha Vihara”, and beneath that the Ashoka Chakra

in blue, identical to how it features in the middle of the Indian flag, and below that a green sign saying “Ambedkar Centre”. The Indian flag is a triband of saffron, white and green with an Ashoka Chakra in the centre.

“This is not an Indian flag,” the trustee said. Saffron and green are important colours in Buddhism with saffron being the colour of monks’ robes, representing renunciation, and green representing mother nature. The 24-spoke wheel represents Buddhist principles and it was Dr Ambedkar who recommended it replace the spinning wheel on the Indian national flag post-independence, he added.

“One of the monks has bought a can of white spray paint and plans to paint over it. This must have been done by Sikhs who don’t know us. We are there for the Sikh community. Whoever did this does not know how harmoniously we live. This is the first time anything like this has happened at this centre which has been here since 1993. We are an educational institute that works according to the principles of Dr Ambedkar. We also offer meditation, classes on Buddha’s teachings, and we have a Sikh teacher who teaches students with learning disabilities. We have not decided whether to tell the police. I need to discuss it with our members,” the trustee said.