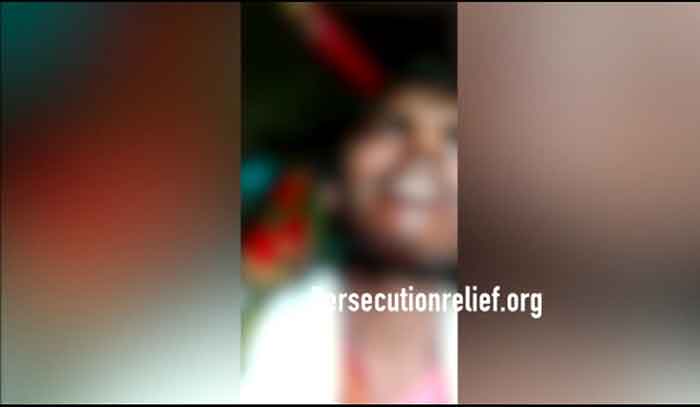 A mob of over 100 religious fanatics attacked a Church at 3pm on the 4th of July 2020 in a village at Dasmada in Azamgarh, a district in the Indian state of Uttar Pradesh. The mob broke into the house that belongs to Senior Pastor Sunita Mourya and beat up the church members that were present there, vandalizing the entire home.

21-year-old Pastor Vikash Kumar Gupta who managed to hide away while the mob attacked, managed to get a video of the incident and immediately sent it to the police and other contacts, requesting help. “The Police promptly arrived and took us to the Baradaha Police station and registered a case. After a medical examination was conducted, we were allowed to go” said Pastor Vikash.

Speaking to Persecution Relief from an undisclosed and safe place, Pastor Vikas said he had overheard the mob saying, “Vikash is the main guy and we must kill him”

Pastor Vikash who assists Senior Pastor Sunita in the ministry told Persecution Relief, “She leads and serves around 30 Christians in that village. Before the Covid-19 crisis, the believers regularly met at Pastor’s Sunita’s home, but on the 2ndof July a few believers who were praying together were taken by shock when some fanatics from a nearby village started threatening and abusing them.”

Pastor Vikash told Persecution Relief that the fanatics questioned him about Pastor Sunita, who was not present at that time as she was at a wedding ceremony and would return only later that day. “As soon as the fanatics left, I called Pastor Sunita to inform her about what had happened. She was upset, but consoled and encouraged us to forgive them and surrender the situation into God’s hands.”

Persecution Relief also spoke to Pastor Sunita who said that the fanatics returned the next day on the 3rd of July 2020. She said that the raging religious goons entered her home and beat her and the other believers who were praying with her. “I was not present for prayer that morning as I had other work, but when I returned, I was shocked to see the state of my fellow believers” said Pastor Vikash.

“That very afternoon the goons returned and dragged us out of the house. They took me, Akhilesh Verma, Rajesh, Vikash and 2 other sisters and forced us to get on a bus that was heading to their village” said Pastor Sunita. She further added that while on the bus, they harassed, threatened and insulted them using filthy language and profanity.

“Once we reached their village, the fanatics took us to their temple and started forcing us to bow down to the idols and worship their gods, but we refused to give into their demands” said Pastor Sunita. Seeing that they were adamant, the fanatics let the believers off with a warning saying that they would kill anyone who was seen anywhere in or near their village.

In conversation with Persecution Relief, a very agonised Pastor Sunita said, “I have faced many struggles ever since I started this ministry at my village. Even my husband left me and our 3 children to fend for ourselves”

Pastor Sunita fled with her three children as the attacks grew increasingly dangerous and her home is completely vandalized by the religious fanatics. She is presently hiding at a safe location.