The destruction of ancient Buddhist sites 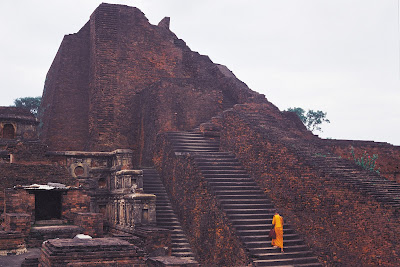 Over his decorated career as a historian, DN Jha has devoted himself to examining flawed views of India’s ancient and medieval past—many of them produced by colonial thinkers—that sustain the Hindu nationalist project. One of his most notable books, The Myth of the Holy Cow, documents the widespread prevalence of beef-eating in ancient India. Another, Rethinking Hindu Identity, argues that the notion of Hinduism as a religion is a colonial construct.

Jha’s new book, Against the Grain: Notes on Identity, Intolerance and History, is a collection of essays that, as he writes, “are addressed to the people vulnerable to the balderdash peddled by the Hindu Right.” In this essay, excerpted from the volume, he applies his characteristic combination of polemic and rigour to a greatly disregarded part of Indian history, and points to evidence that shatters the Hindutva notion of a pre-Islamic idyll on the subcontinent.

HINDUTVA IDEOLOGUES look at the ancient period of Indian history as a golden age marked by social harmony, devoid of any religious violence, and portray the middle ages as a phase of a reign of terror unleashed by Muslim rulers on Hindus. Central to their perception is the belief that Muslim rulers indiscriminately demolished Hindu temples and broke Hindu idols. They relentlessly propagate the canard that 60,000 Hindu temples were demolished during Muslim rule, though there is hardly any credible evidence for the destruction of more than 80 of them. On the other hand, even a cursory survey of historical evidence shows that the demolition and desecration of rival religious establishments, and the appropriation of their idols, was not uncommon in India before the advent of Islam.