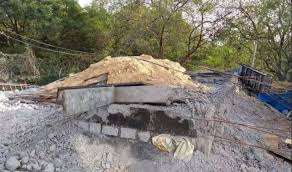 New Delhi/Hyderabad: Unidentified miscreants allegedly demolished a part of an under-construction mosque in Hyderabad’s Neknampur area. The incident took place during renovation of the mosque.

According to locals, the miscreants allegedly covered the CCTV cameras with a cloth before their criminal activities, in an attempt to hide their identification.

The mosque officials lodged a complaint with Narsinghi Police Station. The police officials reached the site and inspected the damage.

The Telangana Waqf Board has raised concern over the incident. Siasat, an Urdu newspaper on Thursday reported that the board’s president Mohammed Saleem had sent its team to visit the place and instructed them to lodge a complaint at the nearby police station. He said the board would take steps for reconstruction of the mosque.

“The vandalism of the mosque at Neknampur raises a question over the good reputation of the government. The government must order a comprehensive inquiry, initiate legal action against the culprits and remove all hurdles in the ‘pucca’ construction of the mosque,” the MBT leader said.

The site was also visited by Congress politician Rashid Khan and Mohammed Feroz Khan. They said that K. Chandrashekar Rao-led government in Telangana has failed to give protection to mosques.

The Hans India quoted Amjedullah Khan as saying that the mosque was established by Ayub Khan some 10 years back in the colony. It was built during tenure of Chief Minister of united Andhra Pradesh Dr Y S Rajashekara Reddy. He allotted land in Neknampur for the Secretariat Employees.

“Since the last eight years, Muslims of YSR Colony have been offering ‘namaz’ in a tin-shed and started construction recently taking required permission from the Commissioner of Manikonda Municipality, as they were facing difficulties during rainy season,” he added.

However, recently on December 23, 2020, advocate Ravinder Viswanath, Senior Standing Counsel, Government of India issued a notice asking the Masjid Committee to stop the construction of the mosque.