The Guna administration was trying to evict the family from a government-owned land when the incident happened. 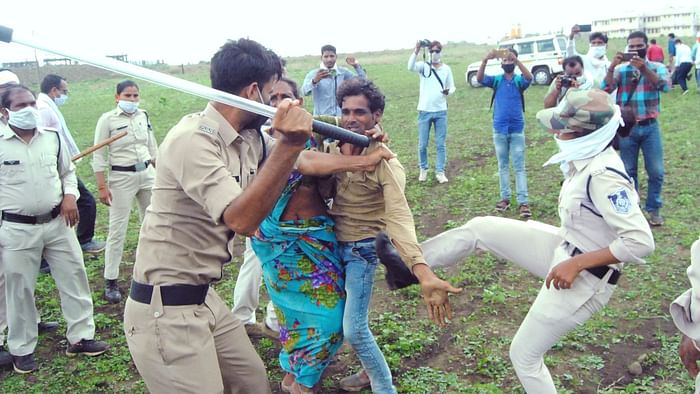 A Dalit farmer couple consumed pesticide in front of their children and police officers in Madhya Pradesh’s Guna after police tried to destroy their crops in a bid to evict the couple’s family from a piece of “government-owned land”.

Ramkumar Ahirwar has been practising cultivation on a piece of land in Guna which is reportedly owned by the State government. The Guna administration had ordered the setting up of a Model College on that piece of land. According to local media reports, there were previous attempts made to vacate the land. But the administration had been unsuccessful in laying the foundation stone so far.

Nirmal Rathore, Tehsildar of Guna City, who was present at the spot on the day of the incident, 14 July, and under whose watch the eviction drive was being carried out said:

“After taking measurement of the land, when the encroachment was being removed with JCB machines, the farmer couple tried to kill themselves by consuming poison.”

IG Gwalior Range Raja Babu Singh told The Quint,“A person named Dabbu Pardhi is the real squatter on government land. He has multiple criminal cases against him too. He had sublet his land to the Ahirwar family for tilling.”

The Quint is trying to reach out to the said accused in connection with the story. The text will be updated as and when he responds.

Pardhi is a nomadic tribal community, found mostly in Madhya Pradesh and Maharashtra, who were among the 150+ tribes labelled “Criminal” by the British government under the 1871 Criminal Tribes Act. After India got Independence, these tribes were denotified but activists say the stigma attached to the Pardhi community is far from being over and the members of the tribe are often falsely accused in criminal cases.

FIRs Against the Couple, ‘Attempt to Suicide’ Charge Illegally Added

Rajkumar and his wife were immediately shifted to the nearest government hospital and the latter is said to be critical. Meanwhile, the police have registered FIRs against Rajkumar, his wife Sabitri and other locals present at the spot. Among other charges, Section 353 of the IPC (Assault or criminal force to deter public servant from discharge of his duty, Section 309 of the IPC (Attempt to suicide) have been added to the FIR.

However, under Section 115 of the Mental Healthcare Act 2017, “any person who attempts to commit suicide shall be presumed, unless proved otherwise, to have severe stress and shall not be tried and punished under” the Indian Penal Code.

Videos that have surfaced on social media showed policemen thrashing other locals present at the spot, including children.

IG Singh told The Quint, “The video has been clipped and is being shared as police weilding lathis on locals but the police was actually trying to shoo away the people who were resisting the cops from taking the unconscious farmer couple to the hospital.”

Opposition leaders hit out at the newly-formed Shivraj Singh Chouhan government in the state over the incident and demanded strict action.

After facing massive flak on social media, the Guna SP and the Collector, who had ordered the eviction drive and defended police action, were removed from their posts on Wednesday, 15 July.

Madhya Pradesh Home Minister Narottam Mishra, in a tweet, said a high-level inquiry has been ordered into the matter.

We’ll get through this! Meanwhile, here’s all you need to know about the Coronavirus outbreak to keep yourself safe, informed, and updated.