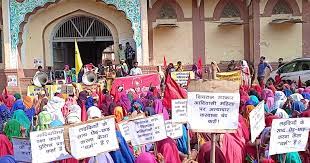 Seven months after the Nemawar murder case, where the state government has recommended a CBI investigation, there were many political colors in this murder.

Dewas: 7 months after the Nemawar murder case, where the state government has recommended a CBI inquiry, there were many political colors in this murder. Now the daughter, who survived the mass murder, has started the Nyay Yatra from Nemavar to plead for justice. This journey will last for 11 days. After 11 days the journey will reach Bhopal. The daughter’s demand is that she should be given justice at any cost and the accused should be hanged.

Demand to hang the accused

In fact, the daughter who survived the mass murder in Nemawar of Dewas district of Madhya Pradesh has started the journey of justice. After touring for 11 days, this journey will reach Bhopal. The daughter, who is taking out the Nyay Yatra, demands that she wants justice and for this she is demanding the hanging of the accused. This justice journey started from Nemavar on Saturday. Worship was performed before the Nyay Yatra. Nyay Yatra is taken out by Bharti Kasde, the only surviving member of the family. The remaining members were murdered. There was a lot of public support at the beginning of the Nyay Yatra.

‘This should not happen to any Dalit family’

Along with Bharti Kasde, MLA Hiralal Alava and many activists associated with the social organization joined. The journey will cover a distance of about 15 km per day. On the 11th day the Yatra will reach Bhopal Raj Bhavan and will bring the CM’s attention to the matter. Regarding the Nyay Yatra, Bharti said that till the family does not get justice, this journey will continue. We want to see the accused hanging. Justice is not done by the initiation of CBI investigation. Right now we are taking a journey till Bhopal. We were wandering for seven months. Then the government did not order a CBI inquiry. When we announced to take out the yatra, this order was given. We are taking out the yatra so that this should not happen to any Dalit family from now on.

What is the whole matter

On May 13, due to a love affair, 5 people of a tribal family were murdered and their bodies were buried in a 10-feet deep pit. The murder was exposed in July. There was a constant demand for a CBI inquiry from the victim’s family. The matter was politicized from the very beginning. Jai Adivasi Yuva Shakti (JAYS), Gondwana Gantantra Party and Congress are also constantly surrounding the state government on this issue. Initially, there was a campaign on social media regarding the CBI investigation. After this, now even after the order of the CBI investigation, Bharti Kasde, the daughter of the family, is taking a justice journey from Nemavar to Bhopal.

Note: This news piece was originally published in zeenews.com and used purely for non-profit/non-commercial purposes exclusively for Human Rights objectives.