“Akhlaq was in recovery. He is not entirely mentally fit after the incident and gets panic attacks,” his lawyer said 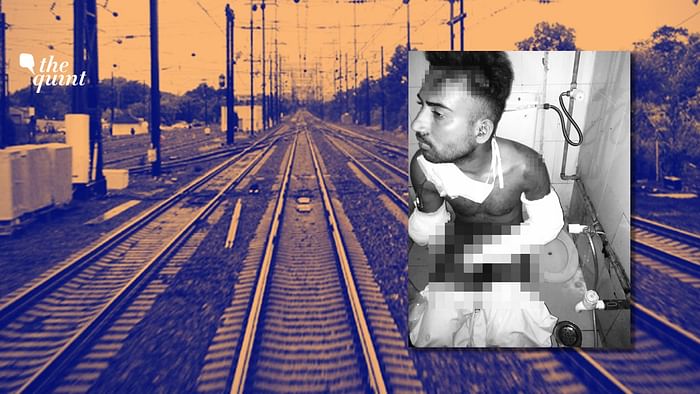 Twenty-eight-year old Akhlaq whose arm was allegedly chopped off early in the morning of 24 August, was arrested by Haryana’s Panipat police on the evening of 5 January, The Quint has learnt. Around 20 minutes later, four of his relatives, all brothers, were detained by Uttar Pradesh Police in Saharanpur district on the same day.

While Akhlaq has been arrested in the context of the FIR registered against him that accuses him of kidnaping and raping a minor boy, his brothers were detained under Section 151 of CrPC which is an arrest to prevent the commission of cognizable offences. His lawyer says that Akhlaq can still not stand, is on medication and has not been mentally stable ever since the incident.

What Is This Case About?

In the incident which happened over four months ago, conflicting versions had emerged in the aftermath of Akhlaq’s severe injuries. Not only was his arm severed, but the other one was badly bruised and he had multiple injuries covering almost his body. Fully bandaged he was recovering at his home when the police came, arrested him and took him to Panipat jail.

While on one hand, Akhlaq and his family members alleged that he was attacked because of his religious identity while he sat in a park in Panipat. He claimed that after some men saw the 786 tattoo in his hand and found out that he was a Muslim, they beat him up. 786 is a number which is used as a metonym for the Arabic phrase Bismillah, meaning, in the name of Allah. Later the same night when Akhlaq went to get water from a local home, he alleges that he ended up knocking on the door of the same men who again beat him and chopped off his hand.

On the other hand, the people he has accused of brutally assaulting him have vehemently denied these claims. They say that he tried to kidnap and rape their son and that they caught him red handed in the act in the park. That Akhlaq then ran away to save his life.

The police say that it was probably when he was running away from the family, that his hand was cut close to the railway track.

Eventually two FIRs were registered on the same day, 7 September. Akhlaq’s complaint was registered by the railway police under Section 323 (voluntarily causing hurt), 326 (voluntarily causing grievous hurt by dangerous weapons or means), 34 (common intention) of the IPC by Government Railway Police (GRP) Ambala Cantt, a few hours earlier on the same day an FIR had been registered against Akhlaq at the Chandni Bagh police station in Panipat under Section 6 (punishment for aggravated penetrative sexual assault), Section 18 (punishment for attempt to commit an offence) of the POCSO Act and Section 323 of the IPC. After competing versions and the cross FIR, the case with the railways was also transferred to Chandni Bagh police station.

While a Special Investigation Team (SIT) was formed by Haryana police on September 12 to probe the allegations made by Akhlaq, the Panipat police officials continued to investigate the FIR registered against Akhlaq.

What Has Happened Now?

This reporter spoke to Akhlaq’s lawyer as well as the policemen in Panipat and Saharanpur district to understand why Akhlaq had been arrested four months after the FIR was registered and more importantly, why his brothers had been detained. We also inquired about the progress in the investigation based on the complaint that Akhlaq registered and is being investigated by the SIT.

“The FIR had been registered in August, but the man was severely injured. So we waited for him to get better. Now that he is better, we have arrested him,” investigating officer Harvinder Singh said. His advocate Akram Akhtar, who is based out of Delhi and has been on the case since August said that was not true.

“Akhlaq was still recovering from his wounds. He continues to struggle with his injuries, he was still on medication as well. He is not entirely mentally fit either after the incident and gets panic attacks sometimes as well. Sometimes he can not even stand on his own. He has been sent to jail in Panipat, he does not have adequate winter clothes or his medication inside,” Akhtar said.

The police however says he is alright. “We got his medical done and he is completely fit and fine, he is okay,” Inspector Harvinder Singh, the investigating officer who is at Panipat’s Chandni Bagh police station, said.

Regarding the investigation into the various allegations made by Akhlaq, Singh, who is also a member of the SIT which had been formed, said that certain reports are pending. “The investigation is ongoing in that. We have written a second letter to get the FSL report from them. Statements are being recorded as well,” he said.

Why Were Akhlaq’s Brothers Detained by UP Police?

The lawyers told us that four men had been picked. “While Ikram, Ashfaq and Afzal, all his brothers were picked up twenty minutes later. Akhlaq’s brother-in-law Nadeem was picked up a day later. They have been picked up under Section 151 of the CrPC.

“The provision states that the arrest of people can only happen if there was a threat of them committing a cognizable offence. Like an assault, a theft etc. However, in this scenario they have provided no basis to have made this detention. Above point two of this section, it states you can not detain a person over 24 hours. However, they were picked up on 5 January evening around 6:00 pm and it is over two days today on 7 January evening and they are still in jail. This is wrong,” Akhtar explained.

The Quint called the SHO at Nananuta police station who said, “The investigation is being done by Panipat police, but they are detained under section 151 of CrPC shanti bhang karne ke lie (for disrupting peace).” When asked what was it that they had exactly done to warrant this detention. “Vo virodh kar rahain the giraftaari ka. Vohi shanti bhang thi. Iske ilava aur koi section nahi daala hai. (They were standing against Akhlaq getting arrested. This is how they were disturbing the peace.)

Akhter and their lawyers have moved for bail for the four men on 6 January. “We were asked for surety which was above Rs 50,000 and hence we had to give land documents as surety. We do not even know what basis they had to do all of this. We provided the documents but the magistrate has pushed the matter citing procedural issues. This does not and should not happen,” he said.