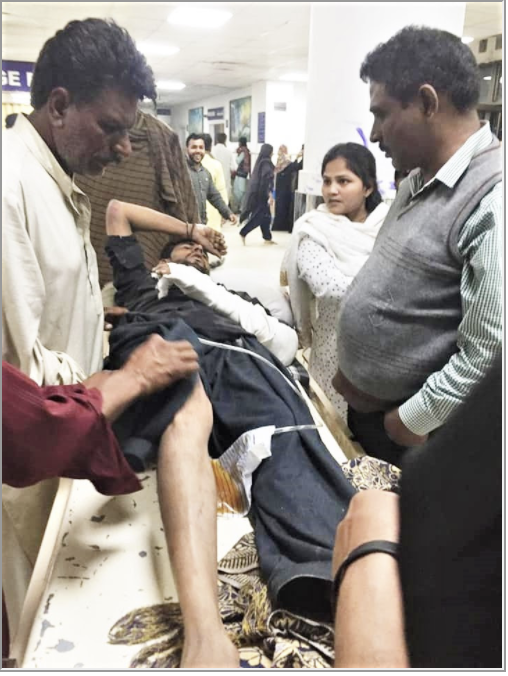 By Our Pakistan Correspondent
LAHORE, Pakistan (Morning Star News) – Suspects in the killing of a young Christian man in Pakistan a year ago have been freed on bail due to police connivance and are issuing death threats to pressure relatives to drop the case, sources said.

Muslim land-owners upset with farmworker Saleem Masih, 22, for “polluting” their tube-well by rinsing in it tortured him to death in February 2020 near Lahore, relatives said. His father, Ghafoor Masih, said suspects Sher Dogar and Muhammad Ali Shahzad have threatened to kill him and other family members if they do not either accept a “blood money” payment or drop the case.

“My son was tortured in front of many villagers, but even the witnesses have backtracked due to threats from the accused and the police, who are acting at their behest,” Masih told Morning Star News. “Sometimes we are offered Diyat [blood money], and at other times threatening messages are conveyed that my sons and I will be killed in a similar manner unless we stop pursuing the matter in courts.

“But even though we are poor laborers, we will not sell our son’s blood and will keep knocking at the doors of justice till his killers are punished.”

The two suspects were released on permanent bail in October after a police investigator told the court that Saleem Masih had died in an accident, he said.

“Despite our hue and cry that our young son was brutally tortured by the accused, the judge admitted the police’s false statement and ordered the release of the accused,” Masih said.

A member of the Associate Reformed Presbyterian Church USA and resident of Bughyana village in Kasur district, Saleem Masih had finished unloading chaff in fields on Feb. 25, 2020, and was rinsing himself off in the tube-well when property owners Dogar and Shahzad rushed over, yanked him out of the water and began beating him, his father said.

“They cursed and abused Saleem for ‘polluting’ the water, calling him a ‘filthy Christian,’” the elder Masih told Morning Star News at that time. “They then dragged him to their cattle farm, where they chained his hands and feet and continued to torture him with sticks and rods. They also rolled a thick iron rod over his entire body, causing multiple fractures in his left arm and ribs. Saleem couldn’t bear the pain and fell unconscious.”

Local police sided with the influential landowners from the onset, according to Masih.

“Even on the day my son was tortured, the police discouraged us from registering an FIR [First Information Report] against the accused,” he said. “In fact, the police just looked on when the accused were torturing Saleem and did nothing to rescue him. It was after much pleading that we were allowed to take my unconscious son to the hospital, otherwise he would have succumbed to his injuries on the spot.”

Attorney Shirjeel Zafar of the Lahore High Court said police had so mismanaged the case that justice for Christian family is highly unlikely.

Investigators removed the “most important piece of evidence,” Saleem Masih’s dying declaration against the accused, from the record, Zafar said. Police also tampered with the medical evidence that formed the basis of the post-mortem report, which consequently helped secure bail for the suspects, he said.

The initial FIR was filed in the absence of the family or their lawyer, he said, adding that the name of the second suspect, Shahzad, was included in the case through a supplementary statement 20 days after the victim’s death, which also weakened the case.

The elder Masih has appealed to judiciary and police authorities to correct the injustices, he said.

Kasur is the same district where an illiterate young Christian couple was beaten and burned to death by a frenzied Muslim mob in 2014 over false allegations of blasphemy. Shahzad and Shama Masih, 26 and 24 respectively, had been accused of tossing out pages of the Koran along with other household waste.

The mob beat the two Christians with sticks and stones before burning them in a brick kiln in front of police officials who stood watching. Post-mortem reports revealed that the two were alive when they were thrown into the kiln.

After the attack, proof emerged that the couple had been falsely accused; the pages that the family burned were their personal documents.

Pakistan was ranked the country with the most violence against Christians in Christian support organization Open Doors’ 2021 World Watch List, where it was No. 5 overall among the 50 countries where it is most difficult to be a Christian.

The U.S. State Department on Dec. 7 re-designated Pakistan among nine other “Countries of Particular Concern” for severe violations of religious freedom. Previously Pakistan had been added to the list on Nov. 28, 2018. The other countries on the list are Burma, China, North Korea, Eritrea, Iran, Nigeria, Saudi Arabia, Tajikistan and Turkmenistan. Sudan and Uzbekistan were removed from the department’s Special Watch List due to improvements in their religious rights records.