Abhinesh Singh, a local has complained of seeing ‘outsiders’ trying to bulldoze houses of Munna Pawan and his kin. 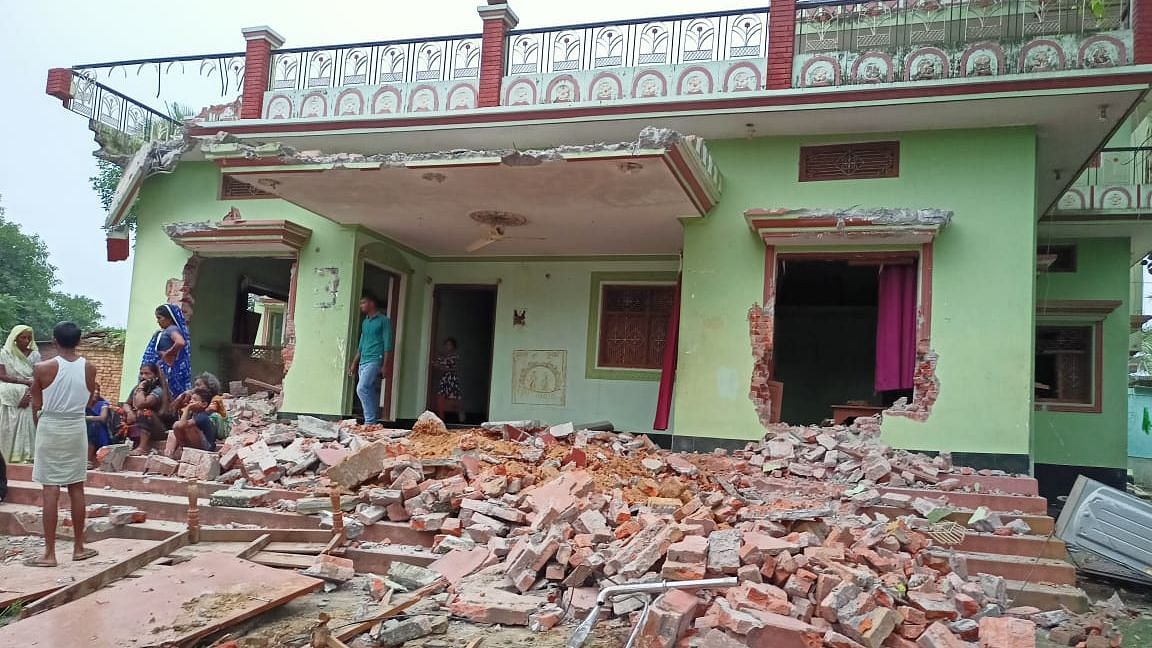 As scores of women from Palia village in Uttar Pradesh’s Azamgarh district hold an indefinite sit-in protest against alleged police brutality following a dispute on 29 June, the District Magistrate and the Senior Superintendent of Police met with the demonstrators at the protest site on Tuesday, 6 July and promised a magisterial probe into the incident.

A statement by DIG Azamgarh Subhash Dubey, after the meeting, said “We have also assured them that no action will be taken till the findings of probe are available with us.”

Protesting women, most of them from the Dalit community, have alleged that a posse of policemen arrived on the night of 29 June, partially bulldozed three houses, vandalised and ransacked furniture and household items, looted jewellery and cash, and assaulted women and children present in the house.

Sub-inspector Tarkeshwar Rai, who is the station house officer (SHO) at Raunapar police station, has been moved to police lines over the matter. 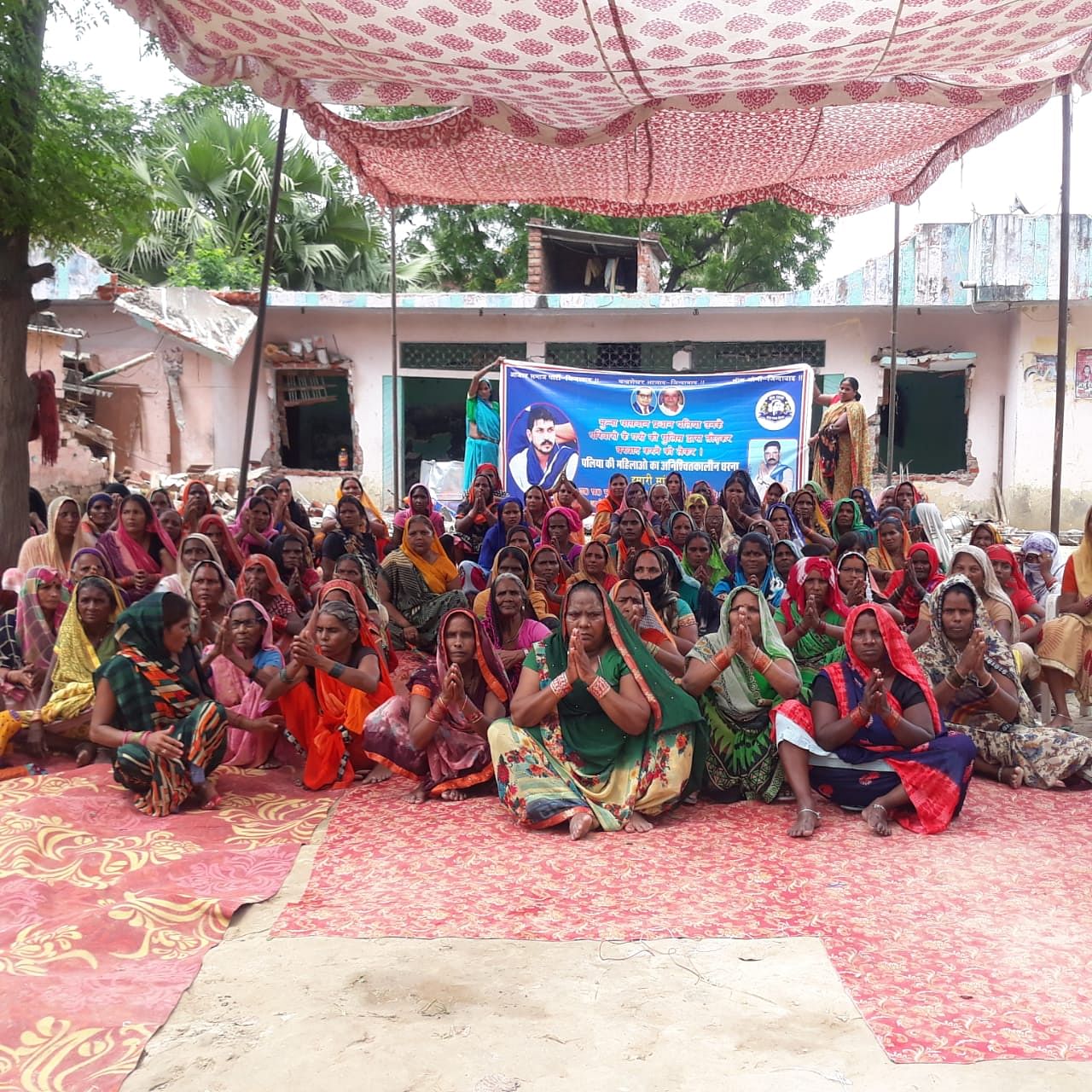 In the evening of 29 June, a group of locals from the village confronted the local doctor, Anand Vishwas, over a girl. Later, Munna Paswan, village Pradhan Manju Devi’s husband, arrived at the scene.

The Azamgarh Police, in a tweet alleged that Munna Paswan and his aides were irked because the son of the doctor, Littan, had recorded a video of them harassing women in the locality.

The police said in the tweet that following the scuffle in the market area on 29 June, a case was filed against Munna Paswan and 11 of his aides at the Raunapur police station.

According to locals, after the police was alerted about the confrontation, two constables reached the spot.

“They tried to forcibly whisk Munna away to the police station. When he resisted, one of the policemen held him by the collar and slapped him. This irked the locals, who then attacked the police.”

However, the police said that one of the constables, Vivek Tripathi, was badly injured by Munna Paswan and his aides.

Late at night, the police allegedly returned with reinforcements to carry out a raid. According to the police, Munna Paswan and some of the other men had fled the village to avoid arrest. But the Dalit women had a different story to tell about the police’s behaviour that night.

“They returned with a bulldozer, a hammer and heavy reinforcements. Fearing a police witch-hunt, men from our families fled, but they were not even remotely aware that the police will go after their houses and families. They didn’t even spare a 3-month-old infant who was injured during the vandalism and is currently hospitalised in a critical condition.”

(Photo: Accessed by The Quint)

The police have reportedly filed three cases in the incident.

The first FIR in the case has been registered against the 12 identified and about 10-15 unidentified suspects on the complaint of Littan Vishwas, who alleged that locals brutally beat him and his father, who tried to intervene.

The second FIR, which has been registered under stringent sections, including attempt to murder, is on the basis of a complaint by the head constable Mukhraj Yadav. It has been filed against 16 named and 100 unidentified suspects for attacking the police team.

Both these FIRs have Munna, his relatives and other villagers named as suspects.

Abhinesh Singh, a local has complained of seeing ‘outsiders’ trying to bulldoze houses of Munna Pawan, Swatantra Paswan and Rajpati Paswan, which is why a third FIR has been filed.

What the Police Said

On their part, the police has claimed that the vandalism and ransacking was done by the owners, in a bid to pressurise the police into not taking further action or pursuing cases registered against them.

“The two constables at the spot began filming the brawl where the quack and his son were being beaten up by Munna and other villagers. The mob objected to the police filming it and began roughing up our men. They chased one of our constables, Vivek Tripathi, for at least a kilometre and brutally assaulted him using sticks. He is admitted in a critical condition at a private hospital,” SHO Tarkeshwar Rai at Raunapar police station said.

“They (Munna and others) got their dilapidated houses demolished by their own men to pressurise police in not taking action in the cases of assault registered against,” he said.

Meanwhile, politics has intensified over the incident. A delegation each from Congress and Samajwadi Party has met the protesting women.

“There is news of police attacking Dalit families in Palia village of Azamgarh, Raunapar. Several houses were demolished, hundreds were booked. This shows the anti-Dalit mentality of the government employees. Immediate action should be taken against the culprits and compensation should be given to the victims,” Priyanka Gandhi Vadra, Congress general secretary said in a tweet.

Former UP CM and the chief of Bahujan Samaj Party Mayawati has also expressed condemnation of the event by calling it a ‘shameful’ incident.

“To be pressurised by oppressors and act cruelly against the Dalits of Palia Village instead of serving them justice is shameful,” Mayawati wrote in a tweet.

She added, “A delegation of BSP, under the leadership of Shri Gaya Charan Dinkar, will visit the village soon to meet the victims.”

Azad Samaj Party (ASP) chief Chandrashekhar Azad, while condemning the incident, announced that he will visit the village and meet the victims on 19 July.

The ASP wrote, “The demolition done at the house of Munna Pasi ji, head of village Palia, district Azamgarh, is a proof of the anti-Dalit mentality of the administration.”

“Yogi ji, Dalit society will not forget the atrocities committed by your police on them. I am coming to Azamgarh on July 19 to meet the victim’s family to get them justice,” Chandrashekhar added.