Gujjars of Sial village, Punjab, say they have been subjected to an economic and social boycott ever since the row over the Tablighi Jamaat congregation in Delhi surfaced. 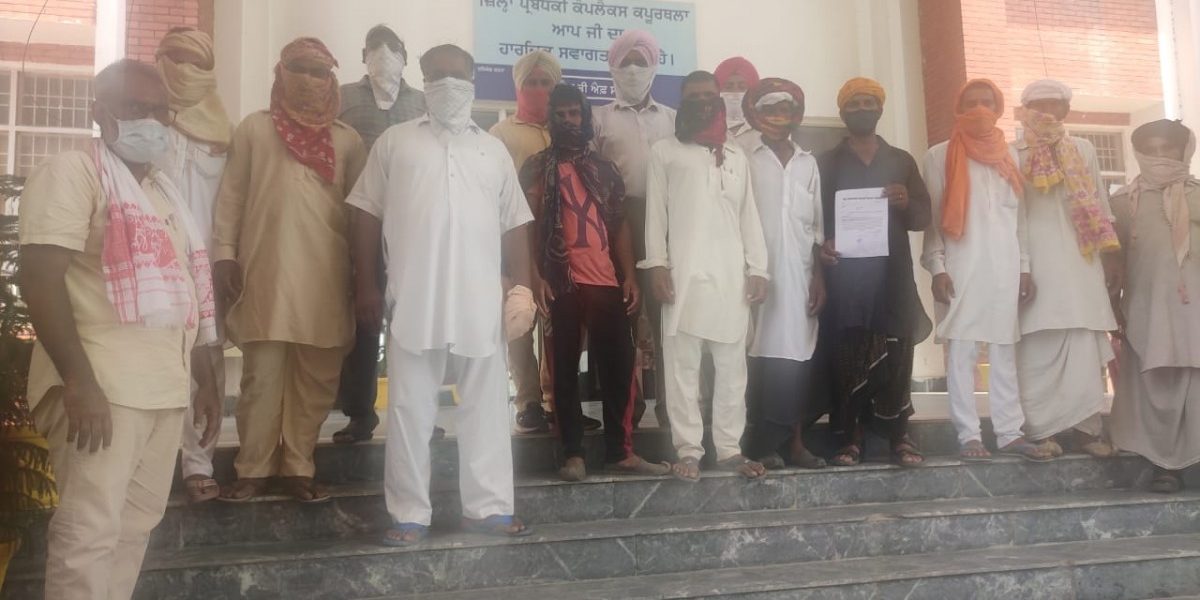 Gujjars at the DC office at Kapurthala. Photo: Author provided

Kapurthala: For Sher Ali and his fellow Gujjars, it was a quiet, uncomplicated life grazing cattle and selling milk on the outskirts of Sial village in Kapurthala district, Punjab, till the COVID-19 pandemic and subsequent nationwide lockdown brought two rude shocks.

Gujjars, who originally hail from Kathua district of Jammu and Kashmir, are traditionally cattle-herders and live isolated on the outskirts of villages. Around 100 Gujjars have been settled outside Sial for the last 15 years. Sial has around 300 voters, of which 45 are Gujjars. A Gujjar, Kasim Ali, is also a member of Sial panchayat.

“Some of our relatives and friends are still settled in Jammu, Basohli, Doda, Bhadarwah and Udhampur cities of J&K and Chamba, Dalhousie and Pathankot in Himachal Pradesh. However, we settled in Punjab,” Sial Gujjars told The Wire.

For them, the lockdown has changed life for the worse.

Not only were they staring at uncertain income, the village sarpanch banned them from bringing their cattle inside the village, using the village link road or grazing cattle out in the open. Worse, sarpanch Ajeet Singh, who belongs to Punjab’s ruling Congress party, told the Gujjars that he was acting on the alleged directions of Kapurthala Deputy Commissioner (DC) Deepti Uppal.

“The lockdown has brought chaos. Three months have passed and we have not taken our cattle towards the village. Earlier our cattle used to graze on grass or crop leftovers in the vacant fields. Now, we are short of fodder and dry chaff for them. Even now that the lockdown is over, our entry is still banned. The panchayat and villagers even stopped the local vegetable vendor from coming to our houses. They told him that we were spreading coronavirus and he should desist from visiting us,” Sher Ali told The Wire. 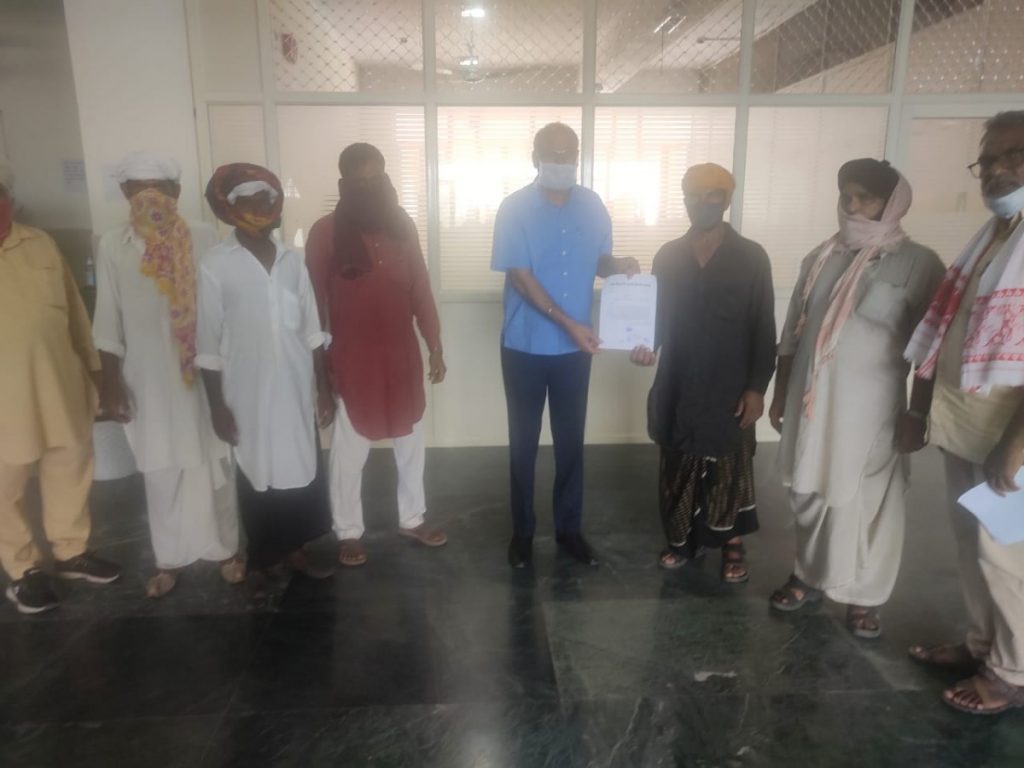 The Kapurthala SDM Varinderpal Singh Bajwa (blue shirt) receives a the copy of a complaint filed by Gujjars against their sustained discrimination. Photo: Author provided

Sher Ali said that the trouble began simultaneously with the hounding of Muslims all across the country after the Tablighi Jamaat congregation in Delhi. “We were being targeted as ‘outsiders’, even though we have our voter identity cards, Aadhaar cards, driving licences and even passports made on our village addresses. We too are alarmed over the COVID-19 pandemic and don’t want anybody to suffer from it, but such discrimination has left us heartbroken.”

Musum Ali, also a Gujjar, said that the villagers do not want them to stay in Sial. “Were we not Muslims when they sought votes from us? They started targeting us after the Tablighi Jamaat row erupted whereas we are not even remotely associated with them. Gujjars are also settled in Gurdaspur, Amritsar and other places but we never heard of any such biases there,” he said.

Sarpanch Ajeet Singh said that he was bound to follow the decision of the majority community in the village.

“When COVID-19 spread, there were strict directions by the DC in the newspapers about not letting anybody enter your village. We implemented this strictly. The Gujjars usually bring nearly 200 to 300 milch animals in the village, break our roads and pavements and even spread cow dung everywhere. There is no such bias against them for being Muslims or Gujjars, but the villagers do not want them to enter the village with their cattle,” Singh claimed. 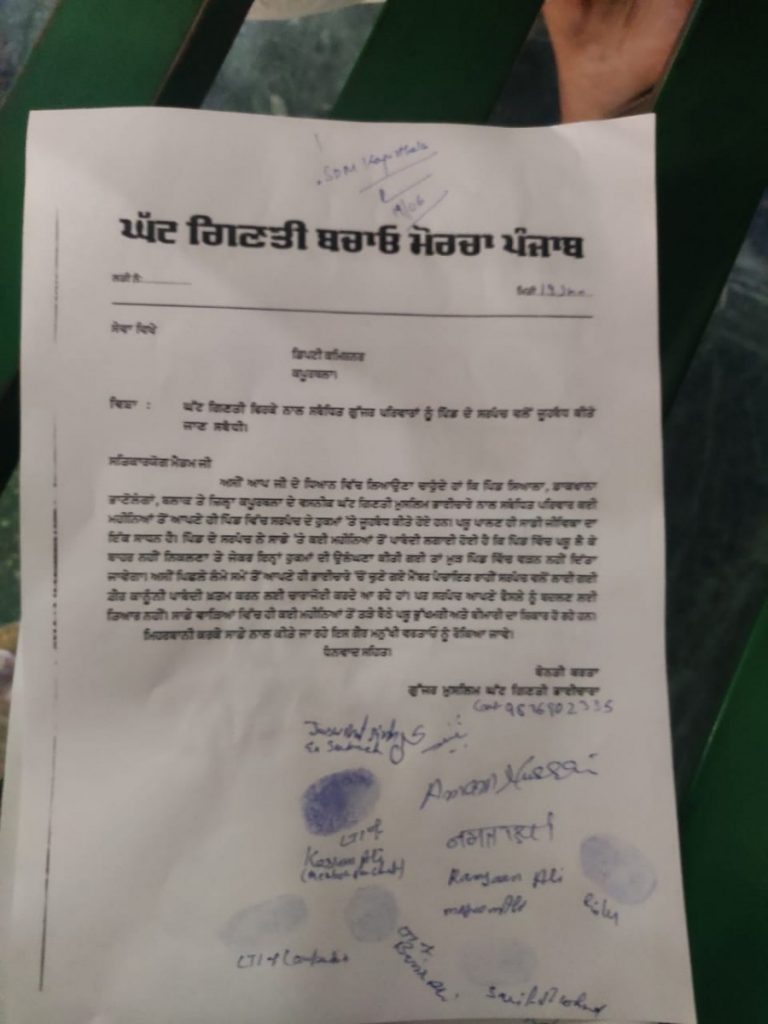 A copy of the complaint submitted to the Kapurthala DC by Gujjars. Photo Author provided

Another panchayat member Lakhbir Singh claimed that the ban was a joint decision taken by the entire village. “The Gujjars leave their cattle in the open and our crops get damaged. Even our clothes get spoiled. This agitated the zamindars (landowners) and it was decided to ban their entry in the village.” However, he refuted the allegations of stopping the Gujjars on the basis of religion in the wake of the Tablighi Jamaat row.

Tarsem Peter, state president of the Pendu Mazdoor Union, who led the Gujjars in their fight against the ban, termed this as sheer injustice. “The Gujjars tried their best to sort out the issue on their own and held meetings with the panchayat too, but they were pushed away. It was only, when they were left with no option that we approached the DC for justice,” he said.

Upon hearing their complaints, the Uppal DC had ordered an inquiry and directed Sub Divisional Magistrate (SDM) Varinderpal Singh Bajwa to submit a report. On the directions of the SDM, the Block Development Officer (BDO) submitted a report in which the panchayat asked the Gujjars to follow certain rules, failing which they will face action. 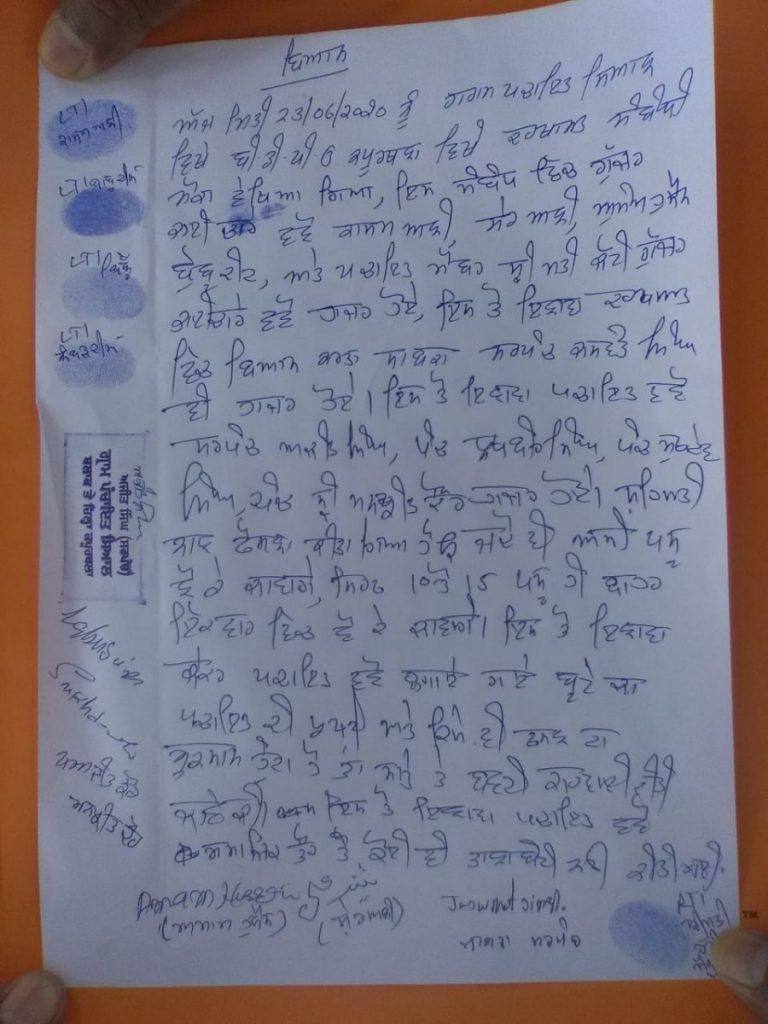 A copy of the BDO order, with signatures of the Sarpanch and Gujjars. Photo: Author provided

A copy of the statements of various parties, recorded by the BDO on June 23, 2020 is available with The Wire. The statement read: “Gujjars would be allowed to bring only 10 to 15 cattle at one time. If any loss to panchayat property, plants or any other thing was caused, strict action would be taken against the Gujjars. However, there would be no social boycott of the Gujjars by the panchayat.”

Notably, following the Tablighi Jamaat row, Gujjars were stopped this April from selling milk in Hoshiarpur district of Punjab too. After The Wire’s report about the case, Hoshiarpur Deputy Commissioner Apneet Riyait had taken strict notice of the issue and intervened to sort things out. Yet, the discrimination continues.