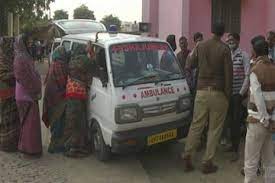 Farrukhabad. The Uttar Pradesh Police may be seen patting itself on the back for its style of functioning, but questions are being raised on the action of the police in Farrukhabad district. The case pertains to the beating of a Dalit pregnant woman by Pradhan in an election rivalry, in which the child died in her womb. The woman also died during the long treatment. In this case, the police did not take action against Pradhan. Now an audio of Pradhan threatening the victim is going viral.

5 months ago, Dabang Pradhan entered the house and kicked a Dalit pregnant woman in the stomach. Her condition worsened when the pregnant woman was kicked in her stomach. Daughter born dead When the condition of the woman became critical, she was admitted to Kanpur. The Dalit woman died, after which the family created a ruckus. The relatives allege that the police retaliated against them. At present, on the whole matter, the victim also made an audio of Davanag Pradhan viral on social media in which the accused Pradhan is threatening the husband of the deceased. At present, in this case, the police is being accused of hiding. Pradhan is also accused of patronizing the ruling party’s MLA.

It has been told that Pradhan, along with his supporters, had entered the house and beat up Tejpal, a resident of Bhatkurri village, in the envy of not voting. He had beaten up his wife Sunita, son Ajit and Ajit’s wife Radha, who came to save him. Pregnant Radha was kicked in the stomach. After registering the NCR, Ajit, his cousin Neeraj and Vipin and Vishundayal from the other side were arrested and challaned for breach of peace. Radha was admitted to the nursing home on November 8 due to labor pain, where Radha gave birth to a dead daughter. On the other hand, on November 25, Tejpal had filed a case against Pramukh Arvind Singh, Kamlesh Singh, Vishnusevak, Vishundayal, Vipin, Manish alias Shivratan on the order of the court for not taking effective action against the accused. .

The investigation of the case was given to CO Rajveer Singh. Meanwhile, Radha’s condition deteriorated. Relatives admitted him to Halat Hospital in Kanpur. The CO had also brought Radha’s statement by going to Halat, despite this no action was taken. On Thursday, the relatives took Radha to the relative’s place after being discharged from Hallet Hospital. Radha died on Friday. Alleging lack of action, the relatives brought Radha’s body to Kotwali and started creating ruckus.

After this Tejpal filed a complaint against the accused. While the police is talking about taking action on the basis of post-mortem, the investigation of this case has been given to CO Rajveer Singh Gaur. Now it will be seen that when the culprits will be punished in the death of Radha, a Dalit woman.

A threatening audio of the accused Pradhan on the whole case has also been made viral on social media by the victim’s family. It is alleged that the entire audio was given to the police, but the police of the victim side did not listen and on the contrary, they were tortured. The family of the deceased woman is very scared of the domineering head and is talking about leaving the village. CO Kayamganj Sohrao Alam stands by his earlier action.

Note: This news piece was originally published in hindi.news18.com and used purely for non-profit/non-commercial purposes exclusively for Human Rights objectives.