New Delhi: Two Dalit girls were allegedly gangraped by ten police personnel in a police station in Sonepat district of Haryana in the first week of July, but no action has been taken so far on the complaint of the girls’ mother in the case. On Friday, nearly 50 people held a protest march in Butana village, demanding the immediate arrest of the policemen involved and the release of the two girls – who were arrested in connection with the murder of two policemen.

Why silence over this incident?

The protest was jointly organised by Chhatra Ekta Manch, Chhatra Abhibhavak Sangh and Valmiki Sabha. The protesters held banners which asked why was there such silence on the alleged gangrape and assault on the two girls – one of whom had even complained to her mother that a stick had been inserted in her private parts.

During the protest, the mother of the victims, who has over the last three months also petitioned the National Commission for Women and the National Commission for Scheduled Castes, said her minor daughter was gangraped for four days in early July by 10-12 men. She said the policemen also inserted a danda (rod) in her and hit her with glass bottles. Speaking outside the deputy commissioner’s office, where the protesters submitted a memorandum to the tehsildar, the mother said the policemen acted with a sense of vengeance. She said the police personnel also beat her and other family members, including her son, and told everyone in the village to socially boycott them and not visit their home.

She also named the four policemen her daughters had primarily named for the assault – Sanjay, Radhe, Dushyant and Sandeep – and asked why they were not being arrested despite such direct allegations against them.

The Dalit girls were held in connection with the murder of constable Ravinder and special police officer Kaptan Singh near Butana police checkpost on June 29. During patrolling, the policemen had stopped the girls and four youth near Hariyali Bazar. While they were trying to take them to the police station, the boys had attacked them with knives and both policemen were killed.

The following day, the police killed one of the accused, Amit, a resident of Jind, in an ‘encounter’. The three other accused – Sandeep, Neeraj and Vikas – were subsequently arrested.

On July 2, the girls’ mother took her daughters to the Baroda police station to ‘surrender’. Thereafter, the girls were produced in court on July 6. It was during this intervening period of four days that the two girls were allegedly assaulted and brutalised.

Then on July 15, when the mother went to see the girls, she was told that the condition of the minor was very serious and that she has been taken to a hospital.

On July 18, when the mother met the minor, she narrated how she was assaulted. The mother then got a complaint registered in the Baroda police station.

Uday Singh Meena, assistant superintendent of police, Gohana, had in late July acknowledged that the mother of the girls had alleged gangrape but denied the charge claiming that soon after their arrest the girls had undergone a medical examination and the report was presented in the court. However, this did not explain how the assault – after the medical examination and before the court appearance – would have shown up in the report. 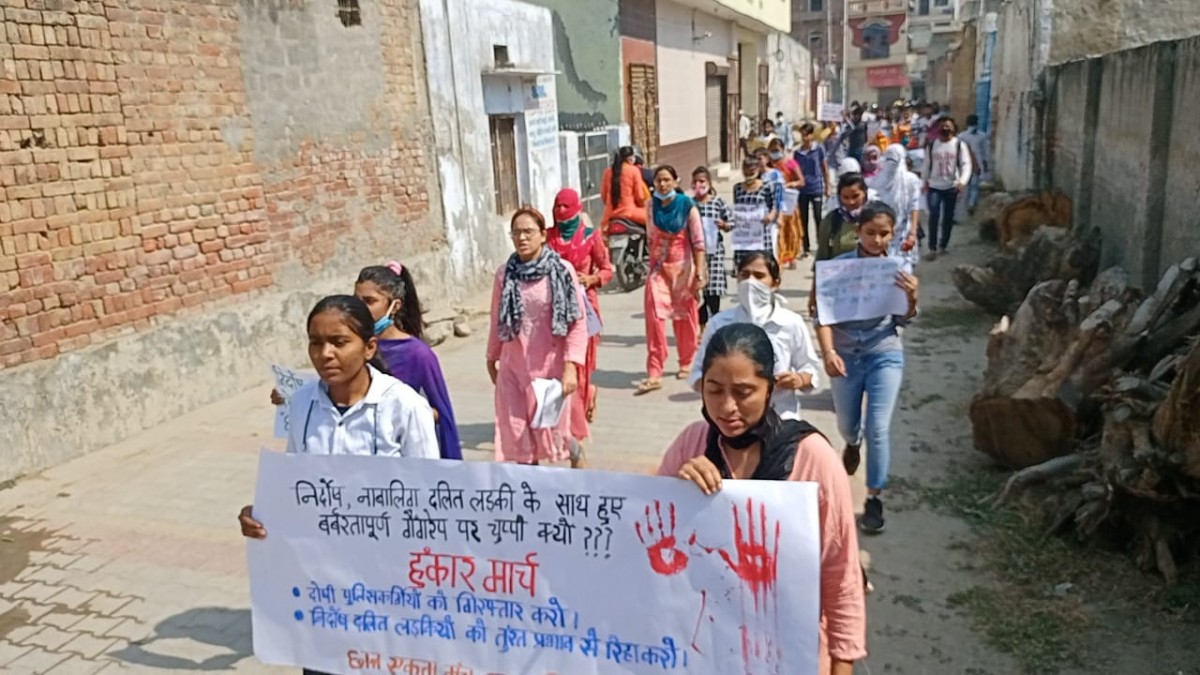 Despite several protests against the gangrape in the past, none of the senior officials have acknowledged the complaint. Photo: Chhatra Ekta Manch, Haryana

Seeking death penalty for the accused policemen, she also asked why the police was not showing the same kind of interest in pursuing this complaint as they did while investigating the murder of the two police personnel.

Despite several protests against the gangrape in the past, none of the senior officials have acknowledged the complaint, she said. It has been presumed that the girls were guilty in the murder and that is why they have been refused bail, she further said.

The president of Chhatra Ekta Manch, Haryana, Ankit said the memorandum submitted to the district authorities following the protest demanded that the accused policemen be arrested immediately and a special investigation team be constituted under a sitting high court judge to probe the matter.

He said it has also been urged that the girls be provided a monetary compensation of Rs 40 lakh and their medical examination should be done by a medical board of either AIIMS Delhi or PGI Chandigarh.

‘Subjected to inhuman treatment on the basis of caste’

In her complaint to the National Commission for Women on September 29, the mother claimed that the elder of the two daughters, who was detained by the police in FIR No. 182/20 of Baroda police station under sections 302, 404, 186 and 358 of Indian Penal Code, was born on September 8, 2000. She complained that when she met her on July 18, the girl charged that she was subjected to “sexual torture (harassment)” by 10-12 policemen in police custody.

“The punishment for all crimes are defined under the laws, but my daughter was subjected to inhuman treatment. My daughter was tortured because she is the daughter of a poor Dalit and we have been persecuted like this for thousands of years,” she wrote.

The National Commission for Scheduled Castes had while taking cognizance of the complaint filed by the mother of the girls directed the deputy commissioner and superintendent of police of Sonepat district on September 10 to submit an “action taken report’ in the matter with details of the incident, nature of crime, name and address of victim, name of all accused, FIR No. with date and sections and number of accused arrested. It had also sought details of the chargesheet or final report and details of compensation given to victim as per Prevention of Atrocities Act and Rules by district magistrate or collector.