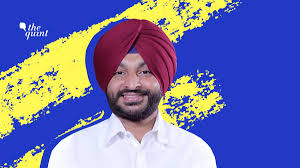 While the Shiromani Akali Dal (SAD) has lodged a complaint against the Ludhiana MP with the Punjab State Scheduled Caste Commission and accused Bittu of passing “casteist” remarks against dalits, the BJP alleged that the lawmaker insulted the dalit community.

State BSP chief Jasbir Singh Garhi too said that Bittu’s remarks reflected the “mentality” of the Congress and added that his party has lodged a complaint against him.

Bittu stirred up a row after he said the “sacred” seats of Anandpur Sahib and Chamkaur Sahib have been given to the BSP by the SAD.

He made the comments on his Facebook page after the SAD and the BSP stitched an alliance for the next year’s assembly polls on June 12.

However, Bittu in another post later said his statement was misinterpreted and added that he only meant that the Akali Dal deserted the “Panthic” seats.

According to the SAD-BSP alliance, the party, led by former Uttar Pradesh chief minister Mayawati, will fight 20 of the 117 assembly seats. The rest will be contested by the Akali Dal.

Workers of the BSP had burnt Bittu’s effigy in Jalandhar on Monday.

The SAD on Tuesday slammed Bittu for allegedly passing “casteist” remarks against the dalits and hurting the sentiments of the SC community in the state.

The delegation demanded that the commission act on the issue immediately to prevent a flare up in the state.

Tinu said the commission had assured the SAD delegation that it would take necessary action in the matter.

“We hope the commission will act in the interest of the dalit community and will not be influenced by the Congress government and give a clean chit to the MP,” he said.

The SAD leader said the dalit community across the state was shocked at the statement of Bittu.

“This (his statement) amounts to saying that the dalits as well as the BSP are unholy. Our community cannot tolerate this insult. The ‘Guru Sahiban’ preached equality between all castes and this equality is also assured to us under the Constitution,” he said.

BJP national general secretary Tarun Chugh said Bittu has not only “insulted” people of the backward classes but also the Sikh gurus and the Constitution.

In a statement, Chugh said it was the “most reprehensible casteiest” remark which reflected the “perverse” thinking of the Congress.

He said while the Sikh gurus kept preaching the message of equality, Bittu heaped a “humiliating insult” on SC people of the state who deserve equal respect and place as others.

Bittu has also “insulted” B R Ambedkar’s thought that is all about bringing equality and respect for all in society.

Chugh asked Bittu to tender an unconditional apology and demanded from the Congress high command to take disciplinary action against him.