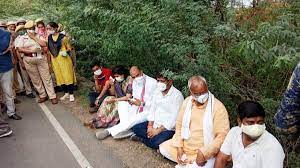 Leaders of BJP’s Rajasthan unit staged a sit-in protest on the national highway after they claimed that they were allegedly denied from meeting the family of Dalit youth Krishna Valmiki.

Krishna Valmiki, a member of the Valmiki community, was attacked in the Jhalawar district of Rajasthan on July 1 and later died due to the merciless beating.

The BJP had on Monday constituted a three-member committee to enquire into the death case of Krishna Valmiki. When the committee members went to meet Valmiki’s family on Tuesday, they were allegedly stopped by the district administration. Following this, the leaders sat on a dharna on the national highway.

The BJP lamented the act of stopping its leaders from meeting the family of Krishna Valmiki, saying it shows the “antiDalit face” of the Congress government in Rajasthan.

As per information, the BJP leaders were stopped by the district administration from meeting the family as Section 144 of CrPC was in place in the district and there was a prohibition on holding political programmes.

The BJP has demanded strict punishment for the accused in the case, one crore compensation for the family of the deceased and a job for one of the dependants.

Six of the accused, including main accused Sagar Qureshi, were arrested on the day of the attack itself, July 1.

The other accused in the case include Raees, Imran, Sohail, Shahid and Akhthar Ali. They have been sent to judicial custody while the seventh accused, a minor, was sent to the juvenile detention center.