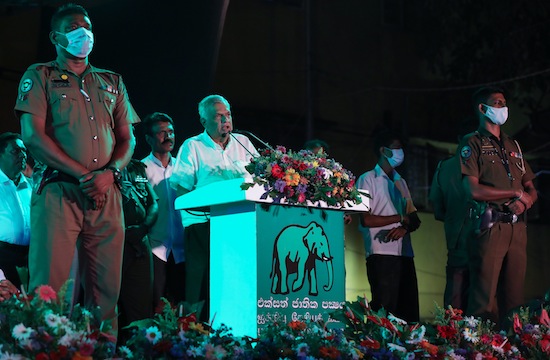 The cardinal said that neither he nor the Archdiocese of Colombo are aligned with any political party or persons seeking electoral gains.

Many candidates are trying to use religion to cover up their corruption and malpractices to come to power again. It seems that some are bidding to get more votes by making hateful statements against the religions of minorities, especially Muslims.

Election Commission chairman Mahinda Deshapriya has received many complaints regarding election propaganda activities carried out at places of worship. He requested all religious leaders not to allow places of worship to be used for promoting or demoting any political party, group or candidate for the Aug. 5 poll.

We have seen on social media that not only election candidates but also a pastor who identified himself as a Catholic priest has asked people to vote for candidates of the current government. The media unit of the Diocese of Kurunegala announced that the pastor is neither a priest nor belongs to any other Catholic diocese in Sri Lanka.

Several candidates are still using the 2019 Easter bomb attacks for their election campaigns. Even some people regarded as partly responsible for these attacks are seeking votes.

A total of 225 members of parliament will be elected. Some 20 political parties and 34 independent groups are contesting the polls. There are 7,452 candidates including 3,800 from independent groups. Some 16 million voters are eligible to vote.

Even though 52 percent of the Sri Lankan population are female, very few women are standing in the election — hardly surprising when many women are insulted for their gender if they post political statements on social media.

Bodu Bala Sena and other extremist nationalist groups have shown their animosity toward both minority Muslims and Tamils in recent months, with leaders accused of openly engaging in hate speech.

Father Cicil Joy Perera, rector of the Daham Sevana Seminary, recently said that many who have been labeled corrupt have received their education in Catholic schools and listened to the Sunday sermons of priests.

Some political analysts said the entire political campaign was basically motivated by anti-Muslim attitudes so that the Sinhala Buddhist majority would gain power.

Some political leaders and officials had been warned of the bombings by foreign intelligence services but did not prevent them.

Sirisena has been nominated as a candidate to contest the general election.

On the first anniversary of the Easter attacks in April, Cardinal Ranjith addressed the country and said that the law should be enforced against all those who were responsible.

The country’s former wartime defense chief Gotabaya Rajapaksa won the presidential election with 52.25 percent of the vote last November. He was the clear victor in Sinhalese-majority areas but his rival Sajith Premadasa scored better in the Tamil-majority north.

Rajapaksa was identified as a strong figure who could assure the country’s security. He and his elder brother Mahinda Rajapaksa, the former president, defeated the Liberation Tigers of Tamil Eelam (LTTE) in 2009, ending three decades of civil war in which at least 100,000 people died.

The other main topic in political circles is how the government has controlled COVID-19. It reacted rapidly to early warnings of the new virus and mobilized its limited resources, with the state-funded health service responding with impressive efficiency.

No recent governments have made any real effort to achieve the desired goals of Sri Lankan voters. They failed because they were caught up in the corruption of power. Many doubt if things will change after the latest election.