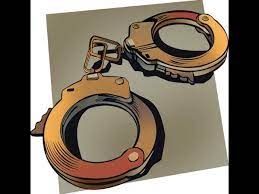 8 men who forced a Dalit youth to prostrate before a banner of the Vanniyar community’s spiritual leader, Kaduvettu Guru , arrested in Nagapattinam district on Friday.

Chennai: Igniting an issue of caste discrimination, eight young men forced a Dalit youth to prostrate before a banner of the Vanniyar community’s spiritual leader, “Kaduvettu Guru”, on Friday (July 2).

A viral video of the incident prompted police to arrest the eight youths associated in the offence in Vandal village of Tamil Nadu’s Nagapattinam district.

The leader of the gang is seen explaining in the video as to why the youth was forced to prostrate before the banner of the Vanniyar spiritual guru.

The Dalit boy, who was coerced to bow low before the flex banner after he had allegedly created a derogatory video about the Guru and shared it on social media platforms including Instagram, was also arrested by the Thalaignayiru police.

According to police sources, he will be produced before the Juvenile Justice Board.

“We have been living in communal harmony in this Vandal village for years and this boy was trying to trigger a communal clash by abusing the spiritual guru of the 2.5 crore Vanniyar population. So he is apologising for that,” he was heard to say.

The man was also seen advising the youth not to indulge in such activities in the future, concentrate on his education and to take care of his family.

However, caste clash between Vanniyar and Dalit is not new, earlier displaying racial superiority; a group of Vanniyar youths stabbed two Dalit boys – Surya and Arjunan to death in Tamil Nadu’s Arakkonam city on 7 April 2021 which triggered public outrage.