The demand comes in the wake of a video that went viral on social media in which a Dalit youth in Thanjavur was brutally assaulted by a mob by tying him to a tree.

New Delhi: Madurai-based human rights organisation, Evidence, which works across Tamil Nadu on caste issue, has demanded that a law be enacted to curb mob violence.

Evidence’s fact-finding team which visited the place in the aftermath of the incident has put forth various demands including a law to curb mob violence. “Incidents of mob violence have been increasing in districts around Cauvery Delta including Thanjavur, Tiruvarur and Nagapattinam. Delta areas are rooted in feudal traditions, and consequently has a history of caste violence. Incidents of bonded labour and tying the labourers to tree are common here,” said A. Kathir, executive director of Evidence, pointing out that another youth Sivakumar was recently beaten to death after being tied to a tree.

Rahul, 21, belongs to Poondi, a village in Thanjavur district. He worked under a sand miner, named Vicky, who alleged that he had stolen money from him. However, as Kathir explained, no complaint of stealing was registered with the local police station. Rahul claimed that he was beaten for demanding his wages.

“On February 1, Rahul was assaulted and tortured from 7.30 am in the morning to 3 pm in the afternoon at different locations including Vicky’s house, a school, graveyard etc. At Vicky’s house, Rahul was made to kneel down, kicked and beaten,” Kathir said.

“At public places, the crowd that had gathered to watch the violence being unleashed were told that Rahul was being punished for stealing. The mob had also recorded the violence on their mobile phone. What we have seen on social media is a small part of what had actually happened. Rahul has been stripped naked and beaten, it is deeply troubling,” Kathir continued.

“When we met him, Rahul told us that the video was being recorded to have documentary evidence for his stealing. They made him confess a crime he never committed, and decided to humiliate him by circulating it on WhatsApp. He was rescued by the police from a brick kiln at 3 pm. The police sent him back with his father who had made the complaint.” 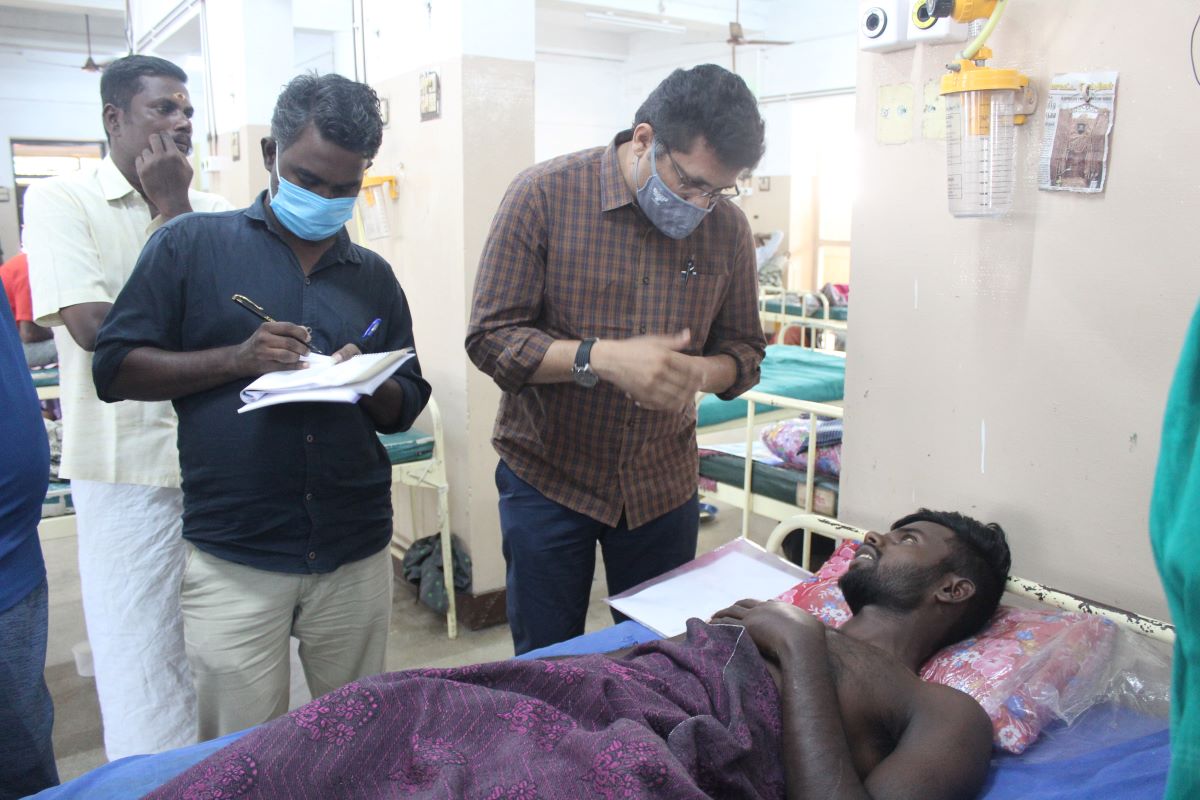 Executive director of Evidence, Kathir and his team meeting Rahul at a hospital in Thanjavur. Photo: Special arrangement

At least eight people involved in the crime have been arrested, Kathir said. Besides demanding a law to curb mob violence, Evidence has also sought a compensation of Rs 10 lakh for Rahul, and arrests of all the accused involved.

“In Delta districts, caste violence is institutionalised as mob violence and Khap panchayat style punishments, besides modern forms of slavery. The Delta districts are fast becoming the capital of atrocities. The state government should take steps to stop this,” he added.