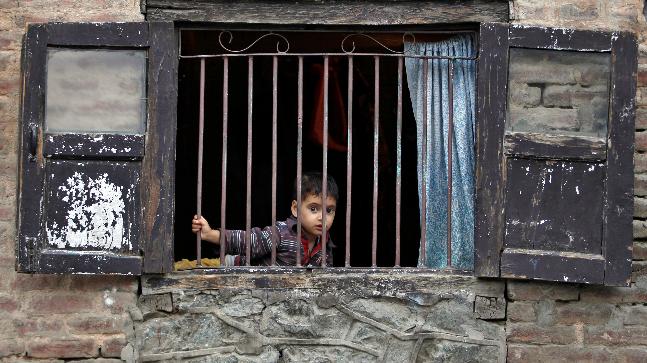 Women and children of the oppressed communities are considered as targets by the oppressing groups. This is even more evident when the oppressed community is a minority. The compound oppression of women from a minority community, seeking justice for their children is an even harder cause. The word ‘mother’ is synonymously used with sacrifice. While, in an attempt to not couch the patriarchal sense to the synonymous use of the words, it also becomes important to pay attention to the mothers and their everyday sacrifices in some conflict zones in India.

Kashmir has often been seen as a topic of ignorance for mainland India. Similarly, proper acknowledgement and remembering is due to the enforced disappearance of children from the valley of Kashmir. Today marks the 343rd day of Kashmir under siege. Kashmir is one the most densely militarized zones on Earth with about 7,00,000 armed and paramilitary forces stationed in public and private spaces throughout the valley. The ratio of civilian to security personnel is 1:7 in the valley of Kashmir.

Almost every day, we receive the news of people being arrested, detained or abducted by the army in Kashmir. Many of whom do not meet the fate of returning home. Gowhar Geelani, in his recent book Kashmir Rage and Reason says children in Kashmir learn terms like “custody killing”, “catch and kill”, “torture”, “interrogation”, “detention” and “disappearance” — internalizing a vocabulary they should not be privy to otherwise. The disappeared children have become a pawn for the politics of occupation.

Women’s participation in the resistance movements have either been invisiblised or treated as insignificant. Kashmir is bleeding and the struggles of the mothers of Kashmir fighting against the extrajudicial killings, enforced disappearance, sexual violence, torture and human rights violation have aggravated the crisis of motherhood. Motherhood, often and stereotypically seen as a pious role of women, has turned into an escalating terror duty of every mother. A reign of terror that no one can ever be habituated to. A life where one lives in a constant fear of their children never returning home from errands. Their only recurring question is “Where are our children?”.

Parveena Ahangar, a mother ailing for thirty years calls Kashmir “a collective prison”. She says, “My son was picked up by the National Security Guard (NSG) in 1990, I have not seen him since”. She is the founder and chairperson of Association of Parents of Disappeared Persons (APDP).

Association of Parents of Disappeared Persons (APDP) is a movement against enforced disappearance. The enforced disappearance of 8,000 to 10,000 civilians have taken place in Kashmir, the sources say. Out of these cases, Javaid Ahmad Ahangar of 16 years of age was picked up from his home on August 18, 1990. He was never found again. Parveena Ahangar, strived to build a movement and demand justice for all the parents of Kashmir through the platform of Association of Parents of Disappeared Persons. She has time and again been denied justice and faced the thrash by the protectors of law but she still did not give up on the search for her son.

She also shared her experience of being denied support by her family members when she found a family within the community of parents fighting against the enforced disappearance of their children. Ahangar denies to receive her son back without each and every disappeared civilian of Kashmir as she believes the fight is no more for her son alone. The association stages their protest on the 10th of every month to demand justice.

Stories from Mothers of Kashmir*

On 5th August 2019, the civilians were put under an unprecedented lockdown and their civil liberties were suspended due to the abrogation of Article 370. The state was under curfew and the reports of protests by residents and stone pelting by the security forces were coming in. There was complete media blockage, limited medical supplies and internet or communication services were/are shutdown. Hither thither was spread across the state. Later, in October 2019, Kashmir was converted into a Union Territory from the state of Jammu and Kashmir.

After a little easing down of the imposed restrictions, various habeas corpus petitions were received, which remains the only available legal resource to gather an estimate of missing people cases. According to a report by a Srinagar-based rights group, Jammu and Kashmir Coalition of Civil Society, 412 habeas corpus petitions were filed post August, as reported by Stories Asia.

“I visited the central jail, where I was thoroughly frisked, almost stripped. They looked inside my clothes and asked me to remove my pheran (a knee-length dress that Kashmiris wear during winters). It was humiliating. I tolerated everything for my child. Even if I have to go through the procedure thousands of times for the sake of my child. I would not hesitate,” said Zaina of eighty years.

On August 5, Atiqa had sent him to run an errand to the market in Maisuma but did not return. Instead, somewhere between his home and the market, Faisal was picked up by the Police. Atiqa of fifty-five years of age says with tears in her eyes, “I am only alive for my son. Otherwise, I have no other reason to live.”