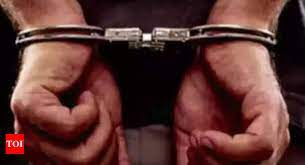 Lucknow: A group of three persons engaged in car accessories business allegedly abducted a 14-year-old minor girl and attempted to molest her.

However, the survivor girl mustered courage and wriggled herself free before the accused could harm her. Police have arrested two accused, Ravi Kumar, 26, and Hummair, 22. Another accused, Sanjay Pasi, 35, is still on the run.

Police said the minor girl had gone to a nearby shop on Monday evening when she was abducted by Sanjay Pasi, Ravi and Hummair. They took her to a nearby place and started sexually harassing her in their parked four-wheeler.

As the minor started shouting out for help, locals approached the vehicle and all the accused left her and fled from the spot. Minor arrated her ordeal to her mother and police were informed. ACP Krishnanagar, Pankaj Srivastava said that a FIR was lodged and we have arrested two under the charges of assaults, kidnapping and protection of children from sexual offences act.

Note: This news piece was originally published in timesofindia.com and used purely for non-profit/non-commercial purposes exclusively for Human Rights objectives.