There is a belief among Pandit residents of the Valley that civil society in Kashmir has not played the kind of role it should have amid the current climate of fear.

Srinagar: Two mosques in Srinagar on Friday, October 8, in pre-namaz sermons requested the public to desist from any action that is likely to cause or aggravate fear among Kashmiri Pandit residents living locally.

The call has been applauded by Kashmiri Pandit Sangharsh Samiti (KPSS). There are around 800 Pandit families living in the Valley.

The development comes in the backdrop of a spate of killings in the districts of Srinagar and Bandipora resulting in the death of around five persons, including three Hindus and one Sikh.

The assassination of Makhan Lal Bindroo, a prominent pharmacist in Valley who had decided to stay put in the earlier 1990s amidst massive Pandit migration amid raging insurgency, has renewed fear among hundreds of Pandits.

There is general belief among Pandit residents of the Valley that civil society in Kashmir has not played the kind of role it should have amid the current climate of fear.

But two mosques in the downtown area of Srinagar have decided to set a positive precedent.

The Wire was able to locate both mosques. While one of them is in Naqashpora area in Srinagar, the other one is located near Sathu Barbarshah and is associated with ahl-e-hadeeth, an orthodox Islamic school.

“These people are our brothers and have been living here for decades,” said Riyaz Bhat, the priest at the mosque who had made the announcement. “We are concerned that any mischief at this point would create fear and we do not want that.”

Bhat ascribed the decision to make the announcement to his religion. “My religious values teach me justice and humanity. I did just that. I told the people to become the muhafiz (protectors) of the people, especially those belonging to the aqliyat (minority).”

In response KPSS sent a text message on its WhatsApp group: “APPEAL TO ALL MASJID COMMUNITIES ACROSS KASHMIR VALLEY TO RESTORE CONFIDENCE AMONG ALL MINORITIES IN THE VALLEY though PUBLIC SYSTEMS,” the message read. “I am thankful to two masjids in the downtown area doing the same on last Friday.”

While the gesture has been welcomed, the tragic episode of last week is still weighing down on the minds of local Kashmiri Pandits. In fact, some families have been relocated and put up at secure facilities.

The Wire spoke to some of these persons but is choosing not to disclose either their names or the places to where they have been shifted.

“My parents are having sudden flashbacks of the nineties,” said a 23-year-old Kashmiri Pandit student from Srinagar. “Many Pandit parents prefer not telling their children about what happened then. They want us to grow with a positive mindset. Then suddenly these attacks happened. Due to extreme worry, my parents are not letting me out.” 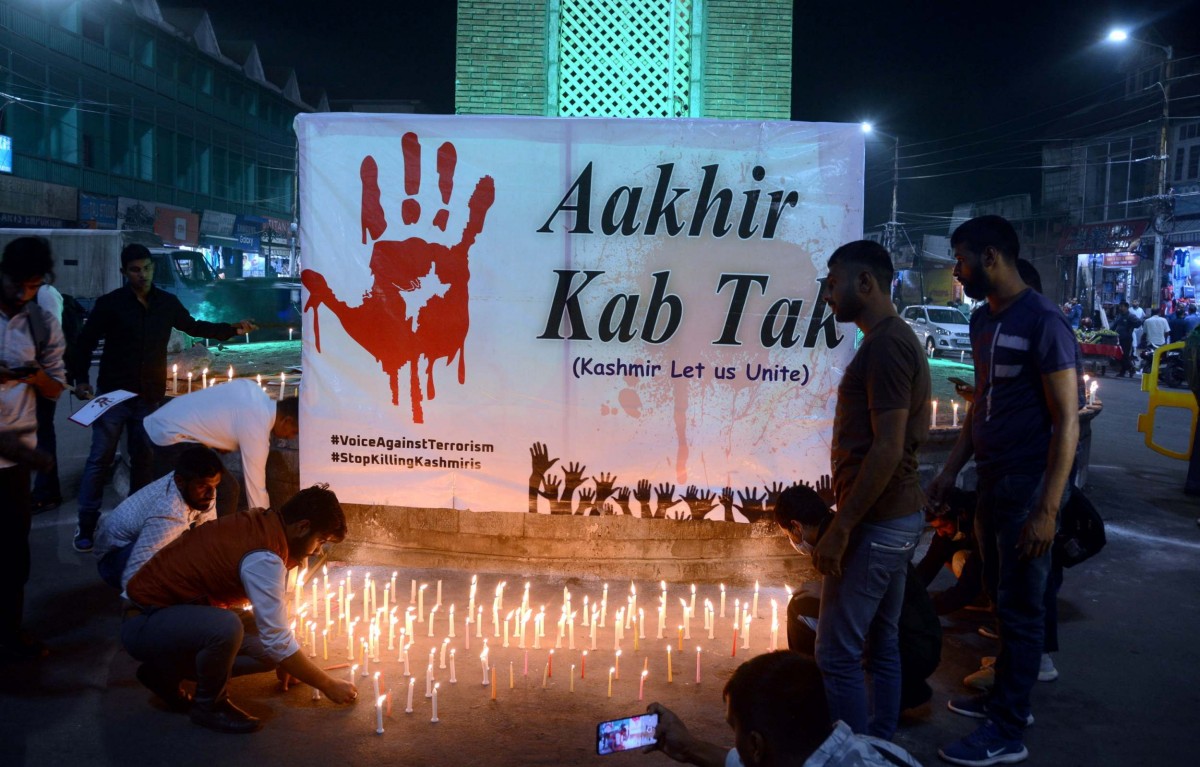 Kashmiri Pandits take part in a candle light protest against the killing of 3 persons including pharmacist ML Bindroo by militants, at Ghanta Ghar in Srinagar, Wednesday evening, Oct. 6, 2021. Photo: PTI

An estimated 76,000 Pandit families left the Kashmir Valley amid killings and threats in the 1990s with the onset of militancy.

As per KPSS, 850 Pandits died during militancy in various targeted killings and massacres. Today the remaining 808 families of Pandits that are still living in 242 places across the Valley form a small fraction of the Kashmiri population.

With not many voices in their support, the Kashmiri Pandit community said they were dismayed. Tickoo of KPSS told The Wire that the “silence” of the majority community was accentuating a feeling of alienation.

“Basic point is that every minority-majority relationship is fraught with the same dynamics. If even one or two target killings of minorities take place, it maximises fear exponentially for the rest of the community. What we need right now is a show of real support, not just a few words on social media. I expected at least 100 people at my home. Only then would I be confident and unburdened by the fear. But not a single soul came,” he said.

Tickoo fears the return of the troubled nineties when lakhs of members of his community fled in droves. “I feel like that element of humanism has not developed here. The culture of what we call a vibrant society has still not been fostered in conflict-ridden Kashmir. This is putting us on the back foot.”

Tickoo said that he was expecting a shutdown call in response to Bindroo’s killing. “But that did not happen. In fact, when two teachers were killed the next day, there was not a murmur of protest. That aspect disturbed me greatly,” he said.

There have been reports of another wave of migration of Pandit families, but as per data compiled by KPSS, only seven families have left on a temporary basis so far. “And they are all from south Kashmir and they will be back soon,” Tickoo said.

Rattan Chaku, a 50-year-old Pandit resident in the Habba Kadal area of Srinagar, said that his relatives in Jammu were ridiculing him for not having left Kashmir 30 years ago. “They call me and yell over the phone, ‘Fansi chuyi bihun, ati kya chui karun?’...Are you there to die, what are you doing there?”

“We don’t have the support system here. I feel scared to join my office. We have neither been approached by the government nor by civil society. It feels like we have been left to our own devices.”

There’s been a massive crackdown across Kashmir in the aftermath of the killings. Reports said that almost 900 persons were detained as security agencies came under pressure to prevent further attacks and break the network allegedly involved in the killings.

The crackdown at times has also given way to the eruption of gunfights between forces and the militants. On Tuesday, forces killed two militants in Feeripora, Shopian, in what was the fifth gun battle in the last 30 hours in J&K.

Earlier on Tuesday, police said they killed three militants in the Tulran area of Shopian. Among the dead was Mukhtar Shah who police said was responsible for killing the non-local street vendor Virender Paswan last week.

ISIS had originally claimed responsibility for the attack on Paswan. But police now say that Shah, his assailant, is associated with The Resistance Front (TRF).

In the meantime, the J&K government has also ramped up security at Kashmiri Pandit residential colonies. On Monday, the Kupwara district administration rolled out heightened security measures for migrant communities in the district.