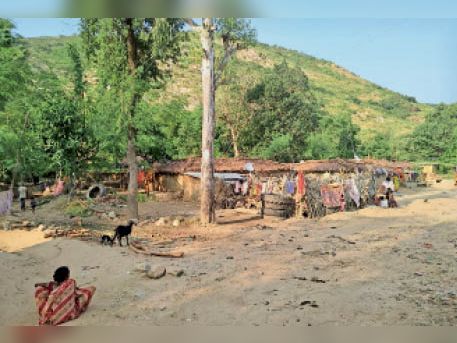 Sangovar Mushari village is situated on the banks of the river under Nardiganj police station in the district, 500 people live in 60 house population, in this village, government planning is far away here

There is also a village in the district where there is not even a single pucca house. In today’s time, when the Indira Awaas Yojana and the Pradhan Mantri Gramin Awaas Yojana are getting so much praise and in reality when the entire village looks like mud and rage and lumps, then people will raise questions. People say that in order to say that every government is busy banging, every poor has a roof to live, But the roof of Nawada district is an example of how many poor people are getting roofed to cover their heads. Sangovar Musahari is situated on the one side on the hill and the river on the other side under the Nardiganj police station of the district. Where Dalits and Mahadalits in more than 60 houses are living their lives. The people of the village say that not a single scheme of the government has been received. The villagers said that the government’s plan is going on in the village and anyone can see and tell themselves. Said that even today, in the house of slavery, more than 500 people are cutting the day like wild tribals in 60 houses.

The government curses day and night in the name of development, the entire village
falls in Sangovar Mushari ward-8 in Dohra panchayat of Nardiganj block. Ward member Manju Devi says she is the ward member of this village. But till date no work has been done in the name of development here. The villagers here visit the Nardiganj Block office to the district headquarters for all their government work. Whenever elections are held from panchayat to assembly. So we also vote in Nawada district. But today we do not have a concrete house built in the village of all the poor working class people by the government scheme. With this, every facility of government is away from the village of all of us.

For Vote Nawada, but it is said that he is in Nalanda district area. The
villagers of the village Hari Rajvanshi, Madan Rajvanshi, Balwanti Devi, Sakunti Devi, Usha Devi told us that the government dries up its politics in the name of Dalit-Mahadalit. It talks long about development. But what is the situation on the ground, we know the soul of the poor. Told that all of us villagers are from Nawada district. But when it comes to development, then the administration and public representatives say that you are all in the area of ​​Nalanda district. He wants to tell the government why my valuable vote is cast in Nawada district.