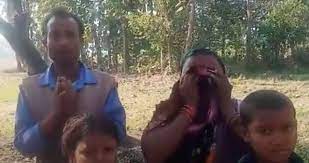 In two of the incidents reported in Kanpur Dehat and Chandauli, the police swung into action only after videos of the alleged atrocities went viral on social media.

Three incidents of Dalits being allegedly harassed and beaten and their homes ransacked have been reported in the state over the last couple of weeks.

In two of the incidents reported in Kanpur Dehat and Chandauli, the police swung into action only after videos of the alleged atrocities went viral on social media. In the third case, the victims accused Azamgarh police of thrashing them and ransacking their houses on the pretext of search. The police, however, denied the allegation.

The most recent of the incidents occurred in Kanpur Dehat where a 19-year-old man was allegedly pulled by his hair, kicked and thrashed by a group of people in a full public view. The incident took place on July 8 but a case was filed on Saturday after a video of the matter went viral.

The National Commission for Scheduled Castes has issued notices to the state government and sought its reply on the incidents.

On Sunday, Kanpur Dehat police arrested four persons allegedly involved in the attack. Raids are on to track down the others who are seen in the purported video of the incident.

The victim, who sustained injuries in the assault, is undergoing treatment at the district hospital and doctors stated his condition to be stable, a police officer said.

On Saturday, two videos went viral showing a youth being tied to a tree and being thrashed. The oppressors are seen poking the victim’s private parts with sticks, questioning him about his caste.

Arun Kumar Singh, circle officer, Kanpur Dehat, said preliminary inquiry suggests that the youth was thrashed over a love affair. A case was registered at Akbarpur police station. “Four persons, who are seen in the video, have been arrested. Raids are underway for the others,” Singh said.

Chandauli police arrested four men from the Thakur community Saturday for allegedly attacking a Dalit family and setting their house on fire over a land dispute at Barthara Khurd village. The incident occurred Thursday but the FIR was filed only after the purported video of the incident went viral.

The clip shows a few men, armed with sticks, threatening people. The victim’s house is also seen on fire. As the video was shared widely across social media platforms, the police made contact with the victim.

On the basis of a complaint lodged by Vejanti Devi, one of the victims, claiming that the accused thrashed her son and other family members before setting their house afire, an FIR was filed against six persons by their names at the Kotwali police station. No one sustained serious injuries.

ASP, Chandauli, Dayaram said four of those named in the FIR have been arrested and raids are on to trace the others.

Police said during preliminary inquiry, they learned that Vejanti Devi’s house is located next to a farm land owned by the accused and they claimed the Dalit family threw waste on their field.

About a week back, a video purportedly of a Dalit family went viral in which their houses at Palia village are seen damaged and household items vandalised. The family accused the police of ransacking their house on June 29.

According to the family, on June 29 afternoon, Palia village head Munna Paswan had gone to a market to resolve an incident involving two members of his family. He had learned that the two had thrashed a youth for meeting a girl from their community. Two police constables also arrived at the spot after coming to know that a few persons had thrashed a youth in Palia market. Munna and his associates accosted the personnel and also tore their uniforms, the police claimed, adding that the accused thrashed one of the constables resulting in serious injuries.

The victim family alleged that on June 29, a police team arrived at their house, ransacked it and beat them up. The police denied the allegation. A case, however, was registered against unidentified persons. A magisterial inquiry has been ordered.