The government’s conduct demonstrates and reaffirms the all-pervasive upper-caste hegemony in India. 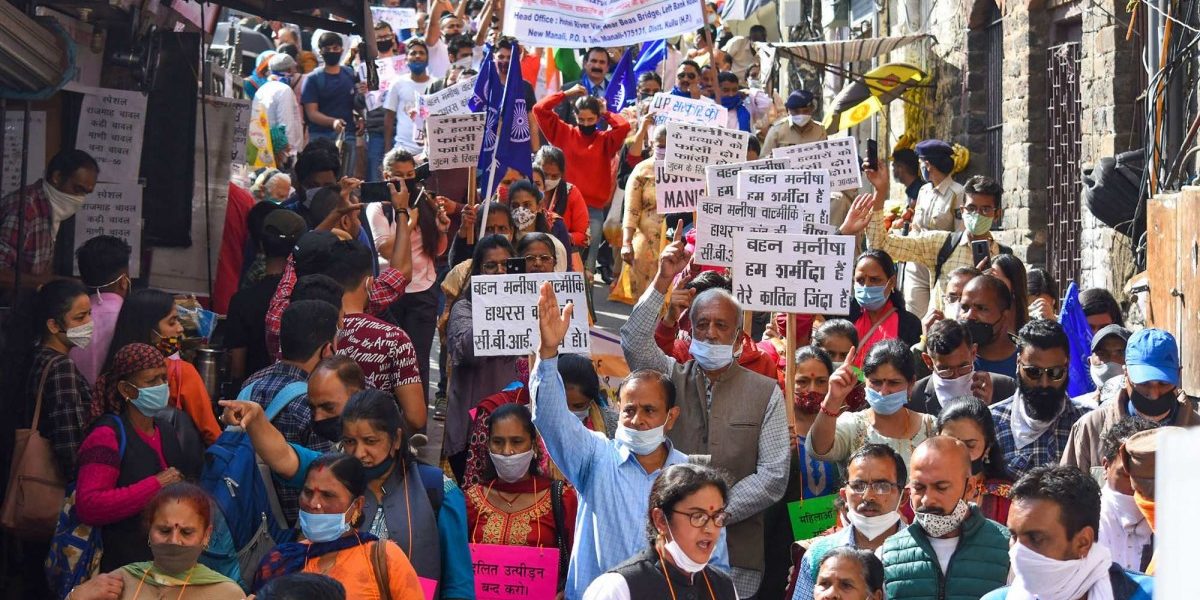 What makes the Hathras gang-rape one of the most controversial incidents of sexual abuse in India is the role played by the state agencies in shielding the upper-caste perpetrators and launching false propaganda of victimisation. It significantly demonstrates and reaffirms the all-pervasive upper-caste hegemony in India. The conduct of the state apparatus in question is violative of domestic law as well as India’s obligations under international law.

To begin with, when the victim was taken to the Chandpa police station in a state of severe bodily pain, the police appeared to be reluctant to help and asked the family to take her away. In fact, the police took cognisance of her allegation of rape a full eight days after the incident, claiming, falsely, that that is when she first spoke about sexual assault. There is in fact a video of the victim lying down in the police station saying her assailants had tried to do ‘zabardasti’, i.e. rape. In addition to the delay, the district magistrate was caught on camera asking the woman’s family to change their statements. The conduct of the authorities violates Article 5(a) (equal treatment before organs administering justice), and (b) (protection against violence), and Article 6 (effective protection and remedies by state institutions) of the Convention.

Explaining these Articles in the context of caste discrimination, the CERD has also recommended India ensure that (i) such victims have access to effective remedies, (ii) legal, medical and psychological assistance is provided to them, and (iii) complaints are properly registered and investigated.

Another serious violation was committed by the police when they hastily cremated the victim in the middle of the night, preventing any involvement of the family. They did not hand over the body to the family despite their requests. This goes against Article 2, para 2 of the Convention which obligates state-parties to take measures ensuring the enjoyment of human rights. Dignity of the human person is at the core of human rights, and therefore, the forced cremation of the victim at night without observing proper rituals and against the wishes of the family injures the dignity of the dead.

In the Hathras case, the upper-caste domination went one more step further, with state-sponsored propaganda that ‘no rape was committed’ simply on the basis of the fact that the forensic report revealed the absence of semen on the body of the deceased.

Similarly, the UP government hired a public relations firm to spread a message through the media that the victim was not raped. This is, first, despite the fact that the samples were collected 11 days after the incident, while forensic evidence can only be found up to 96 hours after the incident, according to the Aligarh CMO. Second, the definition of the offence of rape has been amended in the year 2013, whereby ‘manipulation of any part of the body of a woman so as to cause penetration’ also constitutes rape. Third, before the conclusion of a trial, one cannot say that rape was not committed. Fourth, in her statement before the magistrate, the victim spoke about the incident and named the culprits. Fifth, in criminal cases, the state represents the victim and strives to prove the guilt of the accused. However, in UP, instead of putting forward a strong prosecution case, the state machinery was employed to proclaim the innocence of the (upper-caste) accused as far as the charge of rape is concerned, thus underplaying the gravity of the crime.

As manifestations of caste-based discrimination, these actions of the Uttar Pradesh government have infringed upon Article 2 (state shall not discriminate) and Article 4 (condemnation of propaganda based on superiority of one group) of the international Convention. 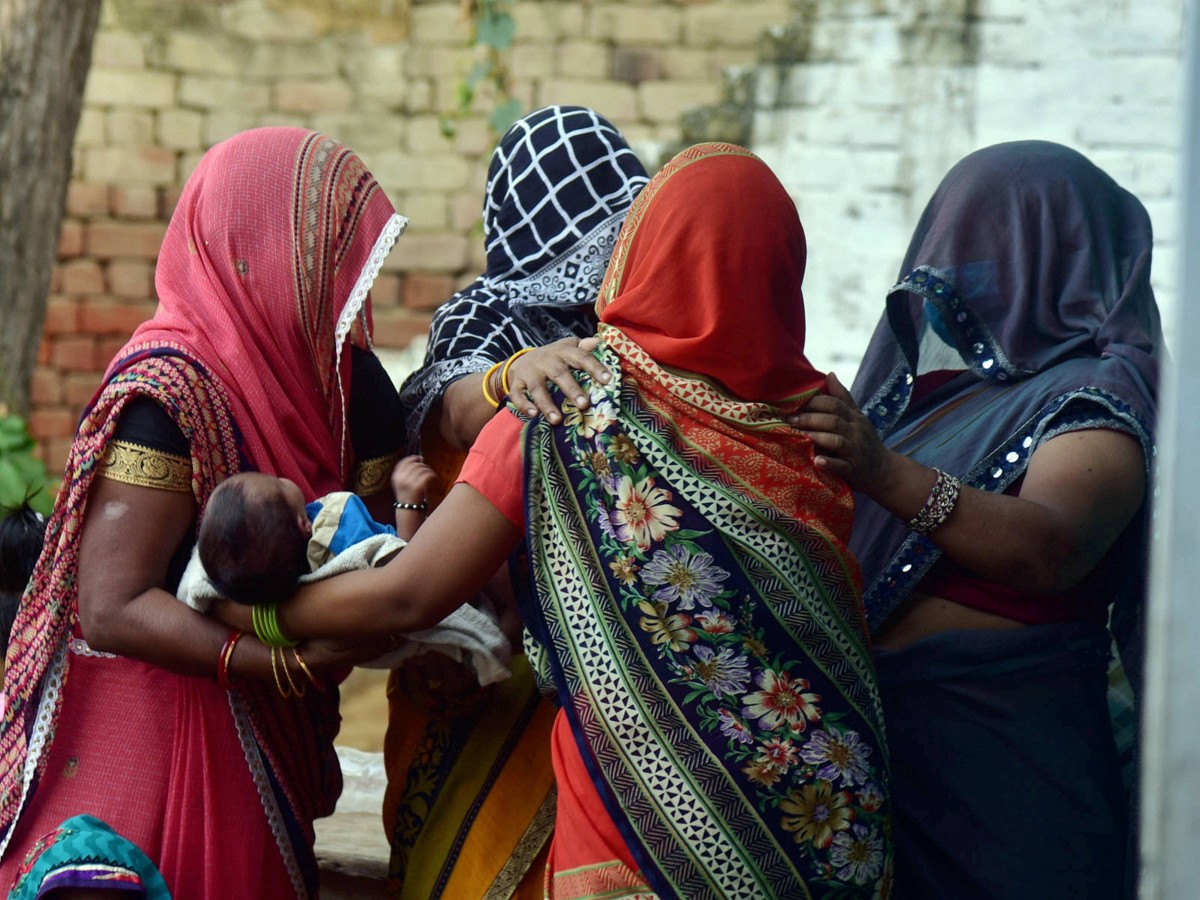 Family members and relatives mourn the death of a 19-year-old woman, who was gang-raped, in Hathras district, Tuesday, September 29, 2020. Photo: PTI

The biased and discriminatory treatment of the state continued in many other respects as well. On one hand, the police asked the Dalit family not to move out of the house and not to speak with anyone. Outsiders, including the media, were prevented from meeting the family, and Section 144 of the CrPC was put in place in the whole of the Hathras district. Yet, two gatherings (panchayats) of upper-caste people were organised unhindered within the district, one in Bhagna village and the other at the residence of a former BJP MLA. It was only after a few days, given the furore, that the police lodged an FIR against the MLA and 100 unknown persons.

These lapses on the part of the state agencies amount to serious violations of not only the Convention on Racial Discrimination, but also various other international human rights instruments, especially the Universal Declaration of Human Rights (UDHR), the International Covenant on Civil and Political Rights (ICCPR) and the Convention on the Elimination of all Forms of Discrimination Against Women (CEDAW).

Given this position of international law, the varied forms of acts and omissions committed by Uttar Pradesh government officials post the Hathras gang rape incident attract state responsibility. However, what inhibits India’s responsibility is her insincerity towards her international commitments and the cause of SCs and STs.

India has not yet made a declaration recognising the competence of the Committee to receive and consider communications from individuals under Article 14 of the Convention. Moreover, India denies the applicability of the Convention to issues of caste-based discrimination on the specious ground that the word ‘descent’ under Article 1 does not cover caste. The CERD has not only negated India’s position firmly, it has also made detailed recommendations towards the prevention of caste-based discrimination and amelioration of SCs and STs in the year 2002 and 2007.

Coming to the domestic front, the Convention on Racial Discrimination may be arguably read into the domestic law by Indian courts. This is because India signed the treaty in the year 1968, and the Supreme Court has held in the case of Karma Dorjee v. Union of India (2014) that:

However, this is not to say that the application of international or domestic law will effectively ensure protection of the human rights of the SCs and STs. Still, the existing mechanism must be used to do whatever little is possible in this direction.