Reports say that Gopinathan hurled caste slurs and threatened to get Muthusamy sacked using his ‘network’. 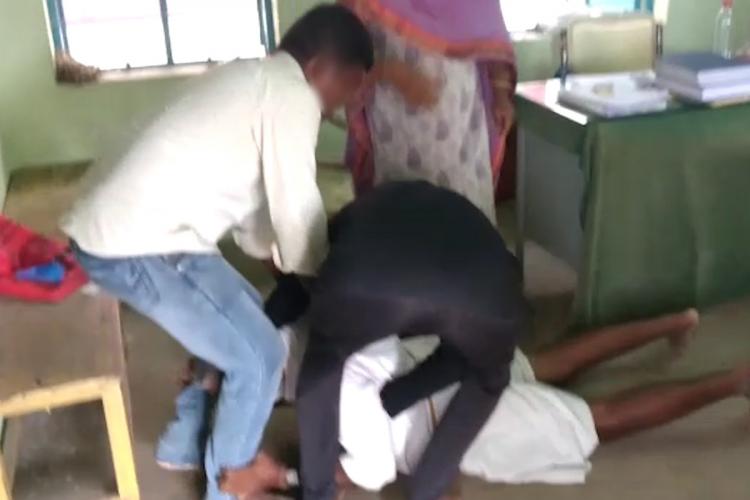 In a shocking incident, a Dalit staff member at the Otterpalayam Annur village administrative office in Coimbatore district has said that he was forced to prostrate in front of a Caste Hindu man who also allegedly hurled caste slurs during a incident on Friday, August 6. According to reports, Gopinathan alias Gopalswamy (42), a man hailing from the Gounder community who works as a marriage broker and is a resident of Annur village had gone to the Village Administrative Officers (VAO) office at 11 am on Friday for procuring land patta without holding any required documents.

Following this, the VAO, Kalaiselvi, told him to bring the mandatory documents to process the patta. Refusing to bring the documents and leave the office, Gopinathan is said to have behaved rudely with the woman officer. Subsequently, Muthusamy (56) a helper at the office and native of Otterpalayam Annur says he urged Gopinathan to speak decently with the officer and to bring the required documents. However, Gopinathan refused to listen and allegedly behaved aggressively with Muthusamy as well.

In a video now doing the rounds on social media, a devastated Muthusamy can be seen in tears and prostrating in front of Gopinathan. The video further shows other office bearers picking Muthusamy from the ground and VAO Kalaiselvi urging him not to do such an act. Muthusamy is further seen bursting into tears and hitting his head with his hands.  Muthuswamy told a media person over phone, the audio of which is also viral, that Gopinathan hurled caste slurs at him and threatened to get him sacked using his ‘network’. This is when he decided to fall at Gopinathan’s feet

Reports say that Gopinathan tried to lodge a case against Muthusamy at Annur police station. However, no action was taken by the police.

In the audio, Muthusamy can be heard saying, “Without holding any documents, Gopinathan started demanding for the patta and was speaking rudely with the VAO. Such caste abuses are not the first time; many times they have hurled caste slurs while working in the agriculture field.”

When asked what prompted Muthusamy to prostrate, he said, “I have always been like that, upon seeing someone from ‘upper caste’ I become submissive. What can I even do, born as a Dalit, I need to be submissive but no choice.”

Muthusamy further alleged that after he asked Gopinathan to behave decently with VAO, Gopinathan insisted he fall on his feet. “ He said I behaved rudely with a caste Hindu man. But how can he be unmannered to a woman officer?” questioned Muthusamy. Caste tensions have been reported from Otterpalayam Annur even previously, in fact a few years ago, Dalits were not allowed to draw water from common wells here.

After public outrage that this incident happened inside a government office, Coimbatore district collector GS Sameeran on Saturday, August 7, ordered that an inquiry committee headed by District Revenue Officer (DRO) Leela Alex be set up. He also ordered that a police complaint be registered and subsequently, that a detailed report regarding the incident post is submitted.

Coimbatore Superintendent of Police Selva Nagaratnam was present at the Annur Police Station for the investigation regarding the incident and ordered an inquiry into the incident based on the video clip.

General Secretary K Ramakrishnan of the Thanthai Periyar Dravidar Kazhagam (TPDK) had urged that action be taken against Gopinathan under the SC/ST Prevention of Atrocities Act.