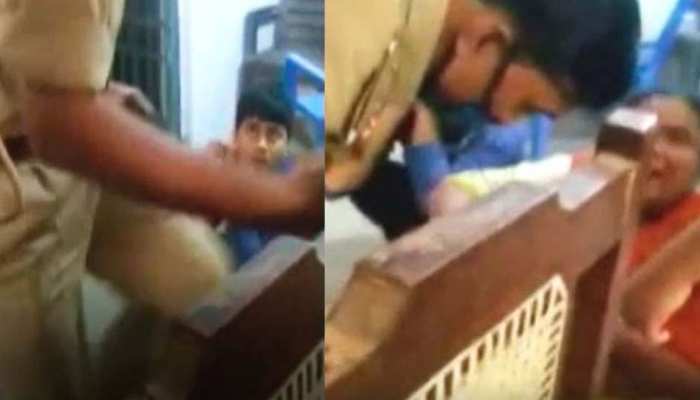 Sadar Kotwal Shyam Pratap Patel’s video of a woman sitting on the floor and giving a third degree with shoes, is becoming viral on social media. After this viral video, the opposition parties have shared the video and questioned the vandalism happening with women in Yogi Raj.

What is the matter?
In the Hamirpur district, the Yogi government’s women’s safety policy is flying. In the police station police station Sadar misbehaved with a Dalit woman. Sadar Kotwal Shyam Pratap Patel’s video of a woman sitting on the floor and giving a third degree with shoes, is becoming viral on social media. In the video, Sadar Kotwal was seen kicking a Dalit woman Kaushalya during the interrogation of Shyam Pratap Patel. Sadar Kotwal released the woman after questioning. At the same time, Sadar Kotwali police is getting into a grudge after the video went viral. Please tell that the victim woman has left Hamirpur and went to some unknown place.

On this matter, SP Narendra Kumar Singh says that in relation to the video being viral on social media, said that no such incident has happened on receiving information. The video seems to be very old. At present, orders have been given to CO Sadar in this regard. Necessary action will be taken on the investigation of the report.

The questions raised on Yogi Raj were
there, in this case, opposition parties were seen circling the Yogi government. After this viral video, the Congress and Samajwadi Party, while sharing the video, have raised vandalism with the Dalit woman prominently in the Yogi Raj as well as raised many questions regarding the women safety policy.