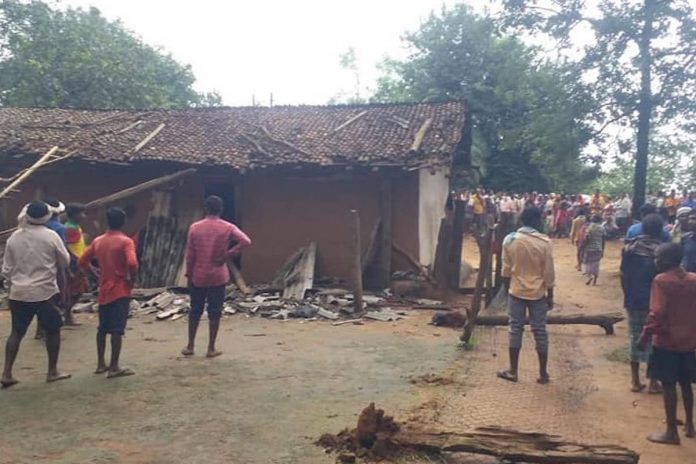 One of the Christian homes that was attacked in Chhattisgarh state last month.

Protestants in Kondagaon district in the central Indian state of Chhattisgarh are living in fear following attacks on their properties by local indigenous people last month.

In several villages of the district including Kakrabeda, Singanpur and Tiliyabeda villages, many houses belonging to tribal Christians were ransacked by other local tribals who asked the Christian families to adopt local tribal customs and culture if they wanted to continue living with them in the villages.

The attacks took place on Sept. 22-23 as tribals wanted the minority Christians to renounce their faith and return to the tribal folds and worship the native deities. Although the district administration claims the situation is now peaceful, the police deployment continues in the violence-hit villages. At least 20 of the 40 members of the fearful Christian families have fled their homes.

Kondagaon collector Pushpendra Meena, a top official of the district administration, said the situation was calm, and the families who had left were likely to return according to their convenience.

He said both parties had consented to maintain peace, but police have been stationed in the villages as a safeguard.

Bastar Inspector General of Police P. Sundarraj admitted the situation was very sensitive and the officials were proceeding cautiously to avoid any untoward incident. He said legal action would be taken against those who indulged in violence and damaged houses.

But Christians in the area are not feeling safe, said Shivram Poyam, a young Christian who lives in Kakrabeda village. “There have been conflicts and clashes in the past, but this was the first time that houses had been smashed up and families left their homes,” Poyam said.

“A mob of about 500 people vandalized our homes and destroyed our crops.

People damaged my house and attacked at least six other houses in the village,” he said. “Local villagers have been asking us to leave Christianity and follow their customs.”

Another Christian from the village, who spoke on condition of anonymity, said there is still tension in the villages although authorities claim normalcy has been restored.

“Christian families are feeling unsafe. They have been beaten up and persecuted in the past. There is no guarantee that more attacks would not take place. We fear for our lives and property,” the Christian said. “The local police did not act promptly and registered a complaint against some people only after we complained to Sonia Gandhi, national president of the Congress party.”

Chhattisgarh is currently under the rule of Congress although Hindu nationalist Bharatiya Janata Party (BJP), led by Prime Minister Narendra Modi, is in power at the national level.

A Christian housewife in Tiliyabeda village, who also spoke on condition of anonymity, claimed local Christians had been facing discrimination and humiliation.

“The villagers claim we don’t take part in their rituals. It is not true. When we attend the events organized by them we are charged heavy fines as they think that we spoil their events and rituals as we are Christians. We are considered untouchables,” she said.

“The community leaders urged the officials of the local police station and the district collector to take action after the attacks,” she said further.

“The collector said the administration would compensate us for the damage. He has been requesting the people who attacked us to give up violence while asking us to compromise.”

Arun Pannalal, president of Chhattisgarh Christian Forum, said tribal believers of the Bastar area of Chhattisgarh have been systematically harassed and pressured to give up their faith.

“Christian families were being threatened by some tribal residents of villages in Kakadabeda and other parts of Bastar,” Pannalal said.

“Members of radical Hindu organizations had been inciting villagers against Christians, but their modus operandi had changed as they do not make direct attacks on Christians,” he said.

Rather they instigate the office bearers of village ‘panchayats’ — village-level organizations for local self-governance with elected representatives — and ‘gram sabhas’ — bodies formed by the amalgamation of up to 50 village panchayats — against the Christians.

“At the village panchayat and gram sabha meetings, the Christian believers are asked to either give up their faith or tribal status,” Pannalal added.