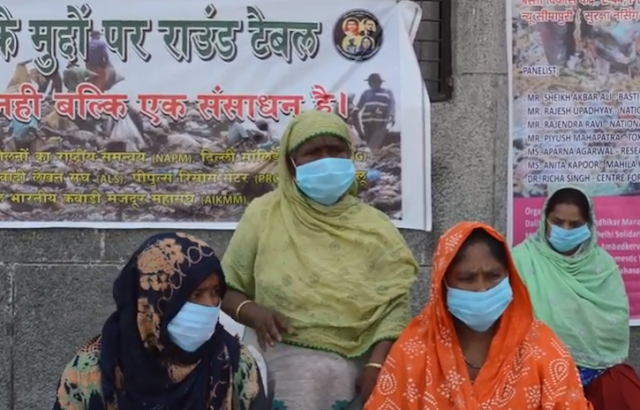 By Our Representative
Delhi-based civil rights organisation, Dalit Adivasi Shakti Adhikar Manch (DASAM), along with the National Alliance of People’s Movement (NAPM), Delhi Solidarity Group (DSG) and the Magadha Foundation, during recent interactions with “worst affected” waste pickers’ and sewer sanitation workers’ families, has said, during the second wave of Covid-19, their condition “deteriorated” with families “forced to live in a very pathetic condition due to the lockdown.”
Mostly belonging to Dalit and other marginalized sections of Indian society, the “people who earn their food daily by toiling are now struggling to procure a single grain”, a DASAM report said. Engaged in providing relief to some of the families to obtain basic necessities, DASAM added, as the adult members of the families used to earn daily income and provided bread to their families earlier, the relief helped them “buy milk, medicine or other essentials.”

Excerpts from the testimonies of waste picker and sewer workers’ families during the relief work carried out in Delhi’s New Seema Puri F Block colony and MCD Colony, Jahangir Puri:
***
Rukhsana, 30, said that both she and her husband worked as waste pickers. Their work has come to a complete halt due to the lockdown. They have 5 children. Children’s studies have also stopped. Along with the difficulty of procuring food and water, they have no money left to buy their own or children’s medicine.

Alia, 40, said, she and her daughter were engaged in waste picking. Her son lives in Kolkata. She and her daughter have been doing this work for many years. But due to the lock down, their work has stopped completely. They can’t go out. If they go out in desperation of work, then the police thrash them with sticks. She asks ‘What should we do in such a situation? If there is no work, how will you live?’
Kohinoor Bibi, 38, said, she and her children used to bring waste from the factory and the surrounding area. After collecting, they sold goods out of the waste, but Corona plagued our business. Also, several festivals are round the corner. In such a situation, when there is a crises to eat and drink, how can we celebrate our festival!

Jahan Ara, 45, said that she and her children brought garbage from Shahdara and Surya Nagar (Ghaziabad) but covid has stopped everything. Ara told the team that on the first fast of Ramzan, she was diagnosed as covid positive but was not admitted by any nursing home or hospital. Her children treated her at home, following the doctor’s instruction. During the treatment, she faced a lot of difficulties. There was neither money, nor work. If they do not work for waste, then from where will they eat? Now, the work of picking waste is completely closed, I do not know how we will survive.

The 25-year-old who did not want to be identified said that he has been doing waste picking for 15 years. He used to earn Rs 200-250 per day but everything is closed due to lockdown. When they go to work, the police cut the challan.

Ram Kishan, 63, who was retired in 2018 as a sewer worker in Delhi Jal Board hails from Valmiki community. His family lives in a rented house whose monthly rent is Rs 5,000  per month. They only get a monthly pension of Rs 12,000 which is not enough. The entire pension amount goes to illness and house rent. He asks ‘how can they buy ration when they are left with little money’.
Roshni Devi, 60, used to do cleaning work in bungalows. Eight years ago, she suffered from chikungunya, due to which half of her body became lifeless and she lost her job. Her two daughters used to work as domestic help but can no longer work due to the lock down. Both the daughters are at home. Our economic situation is very critical. We’ve reached a situation where we can die due to starvation.
Sanjana, 24 used to go Anand Parvat for her cleaning work. Due to the lockdown, she is unable to reach at her working area. She doesn’t have an e-pass and the landlords are not calling her to work due to the fear of Corona. In such a situation, things have become very bad. The state of starvation has come. She doesn’t know when the lock down will end and the situation will improve.
Anjali, 22, said, she used to works as house help. The lock down has taken away everything.
The DASAM report concluded, “The economic situation of these families has deteriorated due to the lockdown. Before the lockdown, these families were able to meet their needs easily due to their occupation, but now the condition of starvation is standing in front of them. The sick and elderly are becoming critical in the absence of medicine. No relief material by the government is able to reach these families. The government also needs to pay special attention to these families.”
Share
Facebook Twitter Pinterest Linkedin