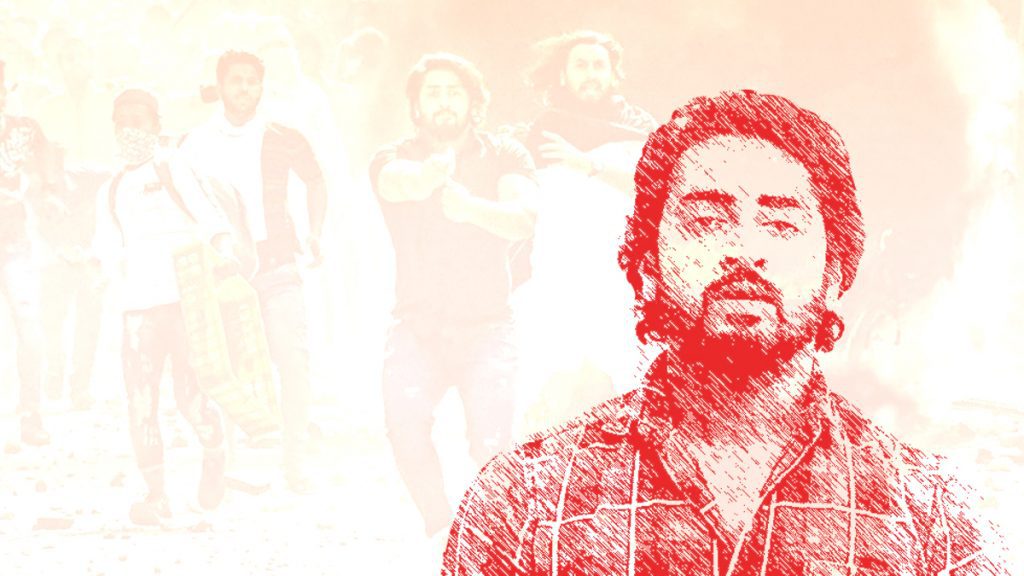 A communal riot involving Sindhi refugee residents and local Muslims broke out on 5 March, 1950, in Katni city of today’s Madhya Pradesh. It started in the Zanda Bazar area of the chowk, as according to the Police constable Bharat Singh who filed the First Investigation Report (FIR) when Sindhis had attacked shops owned by Muslims. Several Muslims were killed. The riot soon escalated and reached Subash Chowk which lies west of Zanda Bazar. Seeing the attacks, Muslim shopkeepers of the Subash Chowk including Amjad Khan and his brother, started closing their shops. Amjad and his brother had different shops, separated by a wall. Amjad’s brother had taken shelter in Amjad’s portion of the building while his own shop was looted and burnt. Done with the loot, the rioters started beating on the door of Amjad’s shop where he was taking shelter with his brother. With a rioting mob outside and nowhere to go, Amjad, in his self-defence, pulled out his gun and fired two shots which killed a Sindhi and injured two others.

Days later, Amjad Khan was tried in court for murder. He filed a petition seeking his right to self-defence. On 20 March, 1950, in Amjad Khan vs The State, the Bombay Highcourt (Nagpur judicature) held that “he was entitled to cause death [in his self-defence] and he did not kill more than one”.

Approximately 70 years later; and 900 kilometres away from Katni – another similar but more intensified carnage against Muslims, which in subsequent days became the worst anti-Muslim riot in the national capital since partition, broke out in North East Delhi. On 23 February 2020, the ruling Bharatiya Janata Party (BJP) leader Kapil Mishra gave an inflammatory speech in the area. In following days, communal violence swept the area with multiple accounts of Hindu mobs attacking Muslim neighbourhoods, aided by the police. Official records state that 53 people, mostly Muslims were killed, while hundreds of Muslims remained missing, and thousands were forced to take shelter in a makeshift relief camp in a nearby Eidgah. One day after the riot broke out, a young man in a red t-shirt was caught on camera pointing a gun at a policeman identified as head constable Deepak Dahiya amidst the violence. The man, later identified as Shahrukh Pathan runs a socks manufacturing factory in his residence and does not have a criminal record. He has been booked for attempt to murder, under the Arms Act, and for using criminal force to deter a public servant from performing his duty. He was arrested on 3 March and has told the police that he did not intend to take out his pistol, but did that only to exercise his right of self-defence.

Shahrukh was on his way to rescue her sister, who was one of the protestors in Jafrabad sit-in protest against Citizenship Amendment Act (CAA) when he got to know about the violence in the area. However, before Shahrukh took it to himself to rescue his sister, his father made several calls to the police which remained unanswered. A week later, a fact-finding report revealed that ‘distress calls remained unanswered for 48-72 hours’ and that police were absent when people needed them. Later, police too admitted that it received four calls every one minute from the area between 23 February and 25 February.

Moreover, evidence also indicates that police were hand in gloves with the rioters and at several instances itself was involved in rioting. In one viral video, five severely injured and bleeding Muslim men were made to lie on the ground and forced to sing the national anthem by policemen. The video showed them crying in pain, while policemen continued to torcher them. One of them, identified as Faizan, later died. Faizan had gone to the police to seek help. The Caravan reported survivors alleging ‘men in uniform’ had torched Farooqia Masjid.

It is in this atmosphere, should one view Shahrukh’s actions. His sense of helplessness, his worry for his sister, rioters and police involved in attacking Muslims with stones, swords, petrol bombs and guns – all had left him with no option but to defend himself and those around him by any means possible. Many survivors later admitted that had it not been Shahrukh, who emptied the streets and forced the rioters to push back, dozens of other innocent Muslims would have been killed. Calling him a rioter is unfair. Comparing him with Jamia Millia Islamia (JMI) shooter Rambhakt Gopal is injustice. He, unlike Shahrukh, was planning to attack Shaheen Bagh and JMI protestors for several days, about which he had been updating on his Facebook timeline. He travelled from Uttar Pradesh to Delhi, fired at a peaceful protesting crowd, which to him, was his last journey. He had posted his farewell message on Facebook – “On my last journey, drape me in Bhagwa and shout Jai Shree Ram.”

It must also be noted that Shahrukh’s action has caused no injuries, and has not led to murder. In a less communally charged environment, less compromised state machinery, and less anti-Muslim government, he would have been entitled to cause death just as Ajmal Khan. On 24 June 2020, rejecting the bail application of Shahrukh Pathan, Justice Suresh Kumar Kait said, “if you take law in your own hands and become a hero, then you have to face the law. Your intention was to become a hero.”

I cannot speak about Shahrukh’s intentions with the same confidence as Justice Kait. But I can confidently say if the Chief Justice of India (CJI) S.A. Bobde did not turn his back to the victims of the violence and said, “We cannot stop incidents from taking place. We cannot give preventive reliefs”, Shahrukh would not have done what he did. The CJI should see the graffiti on a wall in Khajuri Khas, one of the areas affected in the violence, which read ‘who do you call when the police murder’.

Sharjeel Usmani is a former student of political science in Aligarh Muslim University and an independent researcher in ethnic violence in India.